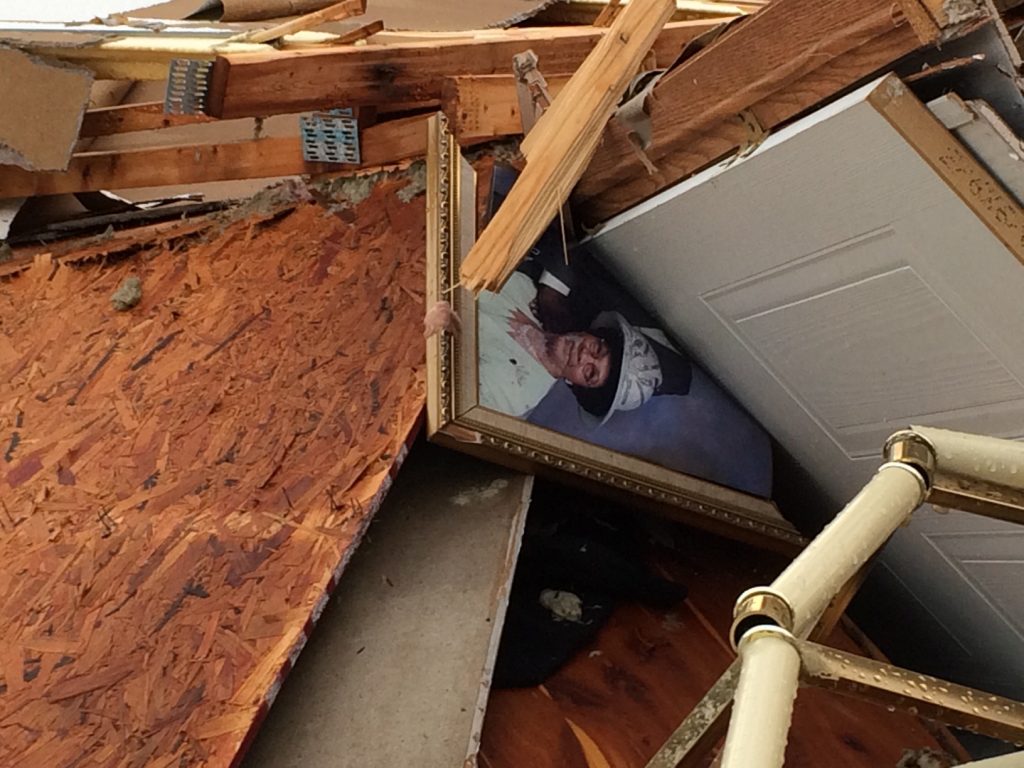 When the winds came for this small southern Georgia farming town overnight, some huddled in hallways, some in bath tubs.

Betty Lee Newsome, 82, and husband Jessie Newsome, 67, still lay in bed. But it wouldn’t have mattered if they’d taken cover.

A reported tornado plucked their single-wide trailer from its cinder blocks and tossed it 50 to 75 yards into the middle of Ga. 122, shredding the home and killing the couple, Brooks County Sheriff Mike Dewey said.

The Barney deaths were among a total of 12 killed by suspected tornadoes early Sunday morning in South Georgia. Eight others died in nearby Cook County when the weather ravaged a mobile home park and two more died in Berrien County.

When the sheriff and deputies arrived at the darkened Barney scene, they weren’t sure anyone was inside the mangled trailer, with furniture, pots and pans and insulation littering the road.

“It looked like a bomb went off in the middle of that house,” recalled Dewey, who’s been with the sheriff’s office for 32 years and has never seen such severe weather in the county.

After searching through the rubble, a deputy found the Newsomes, still on their mattress, the sheriff said.

Sunday afternoon, the couple’s box springs was in the woods across the street. Their belongings were separated in two heaps, one in their front yard, one near the woods.

Erin Flowers stared in a daze. It was her grandmother’s house.

The 30-year-old Valdosta resident said she’d grown up without Newsome in her life and only reconnected with her a few years ago.

The grandmother made collard greens and red velvet cake so good the thought of the tastes brought a smile to the granddaughter’s face, even in grief.

But she then she thought of what she’d lost.

“I’m looking at it and I still can’t believe it.”

The site is a few miles from the crossroads of Ga. 122 and Adel Highway, the center of this quaint town not far from the Florida border but with pride in its Georgia peaches.

Past the Peach Mart food store off Peach Street, residents of the tight-knit community drove slowly down Adel Highway, assessing their neighbors’ damage.

Their faces were long, staring out on the snapped trees and battered houses.

They gave quick assessments to a reporter:

Betty Jean Herring, 85, stood under her carport with her eyes wet, still nervous.

Her home had trees and limbs strewn about the still-swampy yard and a couple of broken windows. Her flower pots were tossed by the wind, and she noticed every car creeping by to look.

She held the hand of two little boys from across the road. They came to stay with the woman, a widow who’s lived in her ranch-style home for 50 years, while their parents tried to deal with the damage at their house.

Herring and the boys pointed to the roof of the home across the street, toward the room of one of the boys. There was a gaping hole.

Back on Ga. 122, passersby stopped to take in the horror of how differently the Newsome’s story turned out.

Lillie Pearl Thompson, 75, was Betty Jean Newsome’s cousin. She spoke softly to herself and the Lord. It hurt to look at the scene and to know she was gone.

She didn’t understand why her cousin and Jessie Newsome had to die in such a way.

Flowers always thought she’d have more time with her grandmother. After so many years apart, she and her grandma were trying to pack in time together, chatting on the phone when they could and visiting.

Just the other day, Flowers thought that she needed to go visit. But it didn’t happen.

Now she searched the wreckage for something to remember her grandmother by.

A photo. A trinket. Something.

Near a ripped-up couch, she saw a photo of her grandma and her grandma’s husband. The frame was bent in half and battered.

Flowers tried to balance herself on the unsteady pile to reach it, but it seemed too dangerous. She stepped down.