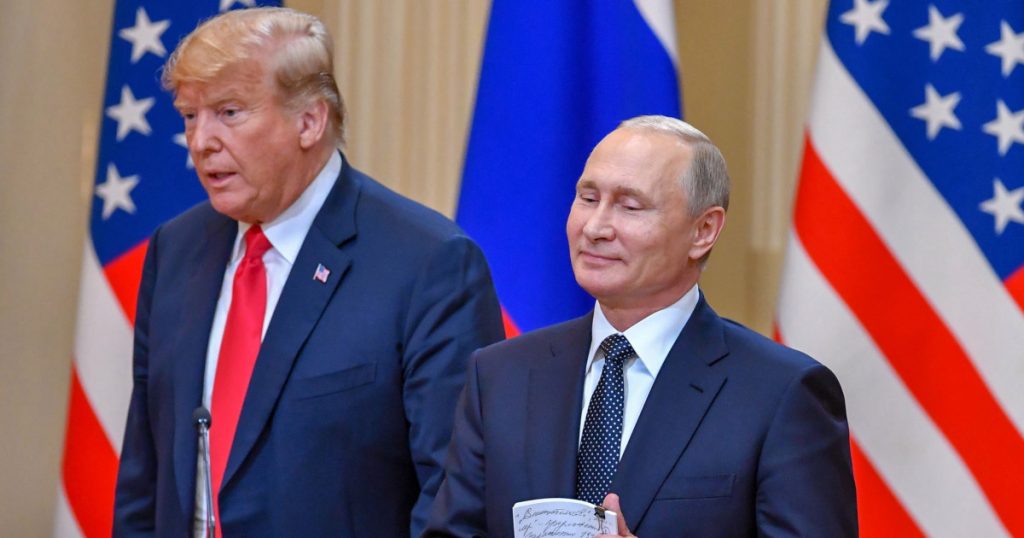 Putin and Trump at a summit in Helsinki, July 2018Yuri Kadobnov/AFP/Getty Images

Every day, the roughly 600 Kremlin-linked accounts tracked in real time on the Hamilton 68 dashboard dive into the hot Twitter topics of the moment. They have fanned rancor over the NFL’s #TakeAKnee protests, and urged Americans to #VoteRed in the midterms. In the past year, the accounts have covered a wide array of subjects—often appearing all-in for the politics of President Donald Trump. Behind the cacophony of about 5 million tweets lies a consistent, relentless propaganda effort, according to analysts who run the dashboard for the nonpartisan Alliance for Securing Democracy, based in Washington, D.C.
“This isn’t about boosting one candidate and demonizing others,” says Bret Schafer, an analyst on the project since 2017. “This is much broader, and that’s the real threat—this steady drip of partisanship that further polarizes us.”
The pro-Putin effort goes far beyond elections, manipulating a broad range of information targeted primarily to a pro-Trump American political constituency. With a deluge of 20,000 to 25,000 tweets each day, Schafer says, the overarching goal is to stoke increasing hyperpartisan divisions and, in the process, steadily chip away at the credibility of US democracy.
Now in its second year of tracking the accounts, the alliance is preparing to implement new tools that will help analysts see where Russian-linked accounts are directly injecting messages into their audience’s feeds and where they are simply piling onto partisan shout-fests to fuel existing divisions. Analysts also are gearing up to start tracking how pro-Kremlin accounts specifically target left-leaning audiences. “They’re trying to work both angles most of the time, and in the future we should have greater visibility into that,” Schafer notes. The first iteration of the dashboard focused on messages targeting a right-leaning audience, he says, because the alliance built on national security analysts’ work observing Russian-linked social-media accounts over several years—and those accounts eventually adopted right-leaning American personas. But evidence within indictments from special counsel Robert Mueller’s ongoing investigation as well as from troves of tweets compiled by other researchers shows that the left has been targeted prolifically.
A report published by the alliance on Friday describes the project’s key takeaways from a year of watching the pro-Putin propaganda machine churn in real-time.

According to the report, for the wide range of US domestic issues covered by the accounts—also including the aftermaths of several mass shootings, and the January-February #ReleaseTheMemo anti-DOJ campaign—the network overwhelmingly shared links from staples for the pro-Trump audience: Fox News, Gateway Pundit and Breitbart. But over the past year, two global topics stood out as consistently high priorities for the propaganda network’s messaging efforts: Syria and Ukraine. These were also prominent topics for high-profile Kremlin media outlets RT and Sputnik.
But while RT was the top source tweeted to the American audience for both topics, the second most-popular site pushed out on Ukraine was a site called Stalker Zone. On Syria, a site pushed out was called Al-Masdar News. Stalker Zone is ranked 651,637 in visitor traffic worldwide and Al-Masdar News is ranked 26,245, according to the website-traffic tracker SimilarWeb. By comparison, Fox News is the 157th most-visited site worldwide, and RT is No. 371. “These obscure sites in the Ukraine and Syria tweets don’t exist in the core Trump media ecosystem,” Schafer says. “If these were genuine American accounts, you’d expect to see them linking to sites like Fox News and Gateway Pundit on geopolitical issues as well.”
The pro-Kremlin network’s accounts likely use their domestic-focused US tweets to build up credibility with their American audience, Schafer says: “They want to look like you, talk like you, and be interested in the issues you’re interested in.” The idea is to encourage Americans to check out these far-flung pro-Russian sources, too.

In comparing the Hamilton dashboard analysis with newly available databases of tweets from the known Internet Research Agency’s network, Schafer found several cases where the accounts he’s been watching echoed the same themes as the trolls that were deployed in St. Petersburg. For example, the #TakeAKnee controversy spiked on the Hamilton dashboard on Sept. 24, 2017, the Sunday after President Trump urged NFL owners to fire players who didn’t stand during the national anthem, and it was a consistent talking point for the network over the next three months. In Clemson University’s IRA database, Schafer found the IRA trolls were tweeting about the NFL anthem protests as far back as August 2016; on Sept. 24, 2017, at least 60 percent of the IRA trolls’ tweets directly or indirectly referenced the protests. On Sept. 24-25, 2017, the Russian propaganda outlets RT and Sputnik also weighed in with multiple tweets on the NFL protests.
The similarity in themes between the IRA accounts and the Hamilton network surprised Schafer because the dashboard was not designed to track the IRA trolls. He’d theorized that the pro-Kremlin influencers on the dashboard would have a different set of messaging goals, with each group playing their part and “staying in their own lane” in a multilayered effort. “There was a significant overlap – not just in topics, but also in talking points and the domains they were sending out,” he says.

Analysts have watched the Hamilton network playing a role in spreading disinformation from obscure blogs into the networks of the mainstream media – an update of the classic “active measures” methods Russia has long been known for. Schafer illustrates the point by comparing two classic and contemporary examples where obscure pro-Russian publications claimed the US was developing biological weapons: One, planted in a US Communist Party newspaper in 1980, reached mainstream Russian publications four years later. The other, planted on a lightly trafficked Bulgarian blog in September, was on RT and Sputnik within days – and had a mention in an Associated Press story by early October. “You’re able to place stories all over the place at a cost of almost nothing,” Schafer says. Other false stories, like conspiracies around the Uranium One deal and the Clinton Foundation, have moved even faster. “We saw that one go from obscure blogs to Zerohedge to Fox News to the president’s Twitter feed,” he says. “It can get there in a matter of hours.”

Spikes in messaging on the network each month responded to a specific event – either a domestic US tragedy like the Las Vegas mass shooting in October 2017, or a hyper-polarized fight like the NFL anthem protests in September 2017, or a global event where Russia has a vested interest, such as the US strikes on Syria in April 2018. But from the Kremlin’s perspective, all of the tweets served long-term strategic goals – including stoking more evergreen tensions, Schafer says. The Russians may not care about specific US gun policy or immigration policy, he says, but potentially weakening an adversary through destabilizing internal conflict is a prime Russian goal. Still, the biggest pushes in messaging did come on topics of clear Kremlin interests: the Syria strikes and in the aftermath of the poisoning of former Russian spy Sergei Skripal in Britain. “It’s a much more tactical, aggressive effort when Russia’s core interests are threatened.” Schafer notes. “The Syria attacks were the only time on the network we saw more than 33,000 tweets in a single day.”

The alliance plans to expand the dashboard soon and will fine-tune the list of accounts it tracks. The accounts still won’t be disclosed, in part so they won’t know they’re being watched. (If they were alerted to being tracked, they might change their behavior and compromise further analysis.) Schafer notes that there’s also a value in tracking the messaging as part of a network, rather than individual accounts. “We monitor accounts whose owners are extremely active in promoting Russian disinformation or Kremlin talking points, but who may or may not understand their role within the network,” he says. “Although these accounts play an important role in the dissemination of disinformation and are thus worthy of being studied, we do not believe that it is ethical to publicly connect those accounts to disinformation campaigns.”
The dashboard’s design will be updated to give analysts and the public new tools to see how pro-Kremlin influencers are targeting left-leaning and right-leaning audiences. The dashboard will also consolidate multiple databases of pro-Kremlin social-media posts in a searchable interface, and will aggregate messaging from official Russian accounts, including embassy accounts and RT, along with the propaganda moving through the covert network.
“We’ll be able to see when there are clear efforts to push messages at the target rather than simply mirror the target audience,” Schafer says. He hopes to better spot propagandists’ hits and misses in terms of reach, and to demonstrate a continuing need to be vigilant about foreign influence operations. “I worry about complacency until we get to the next election,” he says. “This is a consistent campaign to undermine democratic institutions, and they’re making the electorate more polarized.” 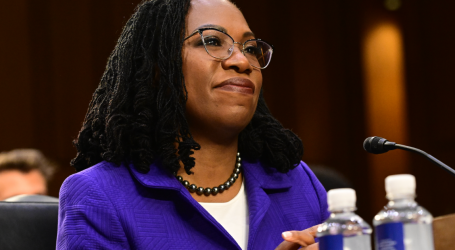 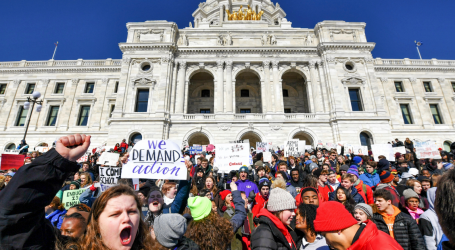