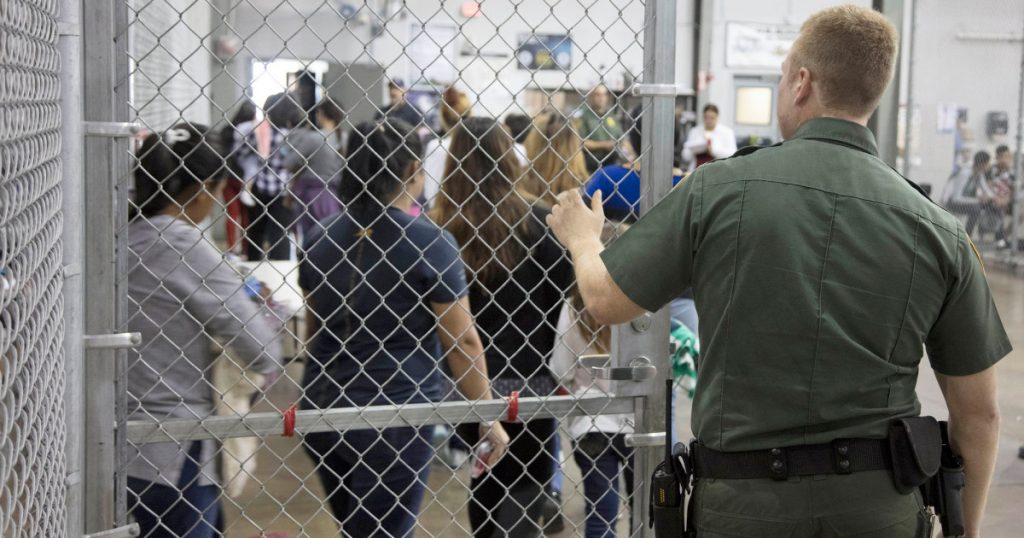 A U.S. Border Patrol agent watches as people who’ve been taken into custody related to cases of illegal entry into the United States, stand in line at a facility in McAllen, Texas, Sunday, June 17, 2018./US Customs and Border Protection via ZUMA Wire

Ten Republican and Democratic governors have announced measures to withhold resources for border security and federal immigration efforts. These moves add to the mounting criticism of the Trump administration’s policy that separates children from parents who are prosecuted for entering the United States without authorization.
Governors of eight of those states—Connecticut, Delaware, Maryland, Massachusetts, New York, North Carolina, Virginia, and Rhode Island—announced this week that they will recall or withhold National Guard troops from the border the United States shares with Mexico. Those troops had been sent there earlier this year in response to President Donald Trump’s request that states deploy National Guard troops to the border in order to support the Department of Homeland Security in stemming unauthorized crossings.
The governors’ announcements represent a strong rebuke to the zero-tolerance policy enacted last month by Attorney General Jeff Sessions and Homeland Security Secretary Kirstjen Nielsen. The policy classifies children as “unaccompanied minors” whose parents have been charged with the crime of illegal entry. As Mother Jones’ Noah Lanard reported, the children, now separated from their parents, have been transferred to the Department of Health and Human Services Office of Refugee Settlement at a rate of about 65 children per day.
The governors represent both sides of the aisle. In Maryland, Republican Governor Larry Hogan and Virginia’s Democratic Governor Ralph Northam each recalled the small number of National Guard troops they had sent to assist with border patrol efforts. Gov. Northam pulled back four National Guard soldiers and one helicopter from Arizona, while Gov. Hogan ordered a similar-sized crew back from New Mexico. North Carolina’s Democratic Gov. Roy Cooper recalled three National Guard troops stationed at the border.

Until this policy of separating children from their families has been rescinded, Maryland will not deploy any National Guard resources to the border. Earlier this morning, I ordered our 4 crewmembers & helicopter to immediately return from where they were stationed in New Mexico. https://t.co/TEfkUXF7ZN
— Governor Larry Hogan (@GovLarryHogan) June 19, 2018

In recent weeks, Massachusetts Governor Charlie Baker had committed to sending two military analysts and a helicopter to assist the Arizona and New Mexico National Guard deployments. On Monday, he announced a reversal of that decision in light of the family separation policy. “I said two weeks ago that I did not support the decision of the Trump administration to separate kids from their families,” Baker told reporters yesterday. “I think it’s cruel and inhumane, and we told the National Guard to hold steady and to not go down to the border, period.”
On Tuesday, Delaware Gov. John Carney (D) said he had received a request on Tuesday to send troops to the border, but had declined in light of the Trump administration’s policies.
Connecticut, New York, and Rhode Island have not been called upon to send National Guard troops to assist in border patrol efforts, but their announcements serve as a public condemnation of the Trump administration’s policy. Of the eight state executives who withheld their troops, half of them—Baker, Hogan, Cuomo, and Rhode Island Gov. Gina Raimondo (D)—are up for reelection this year.
In Wisconsin, Governor Scott Walker (R), deployed Wisconsin National Guard troops to the border yesterday, despite strong objections from state Democrats who called the move “repugnant.” In April, Gov. Walker had said he supported Trump’s “aggressive actions” to secure the border “as part of a comprehensive strategy in dealing with opioid and illegal drug addiction.”
These governors’ actions are just the latest in resistance to the Trump administration’s immigration policies coming from the states. According to the Center for Immigration Studies, seven states—California, Colorado, Illinois, New Mexico, Oregon and Vermont—have state sanctuary laws, which limit or prohibit state agencies from complying with ICE detainers or impede information exchanges between state personnel and federal immigration officers. Earlier this year, the Trump administration sued California, its governor, Jerry Brown (D), and its attorney general, Xavier Becerra (D) over state sanctuary laws, on the grounds that, according to the Justice Department, the laws “reflect a deliberate effort by California to obstruct the United States’ enforcement of federal immigration law.”
Sending troops is not the only way that states are fighting the policy. The governors of Colorado and New Jersey have both signed executive orders that prohibit state resources from being used to assist immigration officials in carrying out the administration’s policy.  New York’s Gov. Andrew Cuomo also announced on Tuesday that his state will file a lawsuit against the Trump administration “for violating the Constitutional rights of immigrant children and their families who have been separated at the border.” 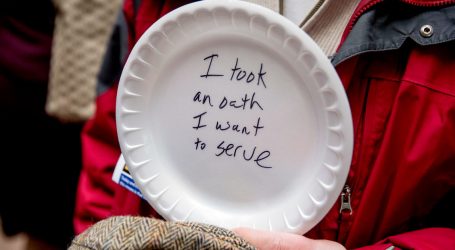 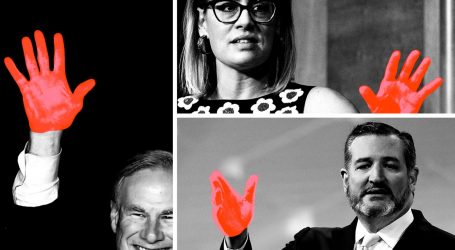 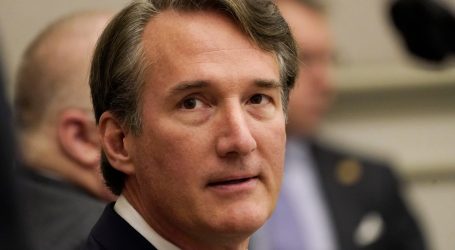