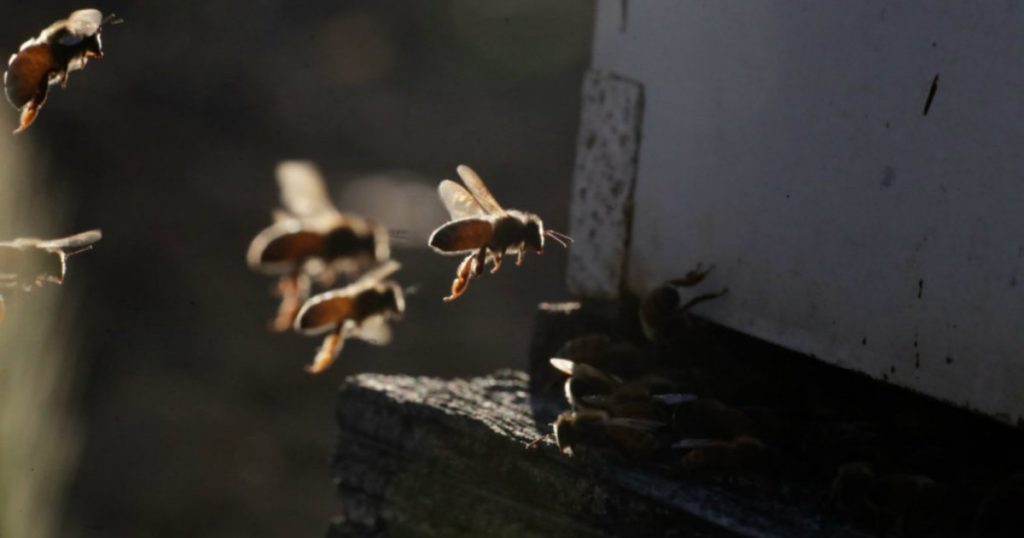 Honeybees return to a hive at an apiary in California’s Central Valley. Bees have become big business in California, as they are an essential ingredient in the state’s yearly almond harvest.Paul Kuroda for Reveal

This story was originally published by the Reveal. It appears here as part of the Climate Desk collaboration.
The crime scene was a mess of boxes, some half-assembled, others scattered across patches of dried grass and partially gouged to raw wood. The victims scrambled about looking for food and water. There were thousands of them. Maybe millions.
Detective Isaac Torres watched the action from the air-conditioned safety of his unmarked truck. In five years investigating rural farm crime, he’s seen a lot: Stolen construction equipment and copper wire. Hay thieves. Cargo heists.
“You name it, we pretty much cover it, if there’s any type of ag nexus to it,” he said.
But what he was looking at now, in this scrubby field 10 miles southeast of downtown Fresno, was something else entirely.
“What we had here was a chop shop, but of beehives,” Torres said. “You had some beehives that were alive, and you had some hives that were dead. You had hives that were basically cut up: Tops of boxes were over here on this side of the field, and the other parts of the box are on the other side.”
As a member of the Agricultural Crimes Task Force for the Fresno County Sheriff’s Office, Torres knew that bees have become big business in California—that they are an essential ingredient in the state’s yearly almond harvest; that three-quarters of America’s domesticated supply is trucked into the state each winter and rented out. He knew how valuable the insects have become—to farmers, yes, but especially to thieves, who in recent years have grown bolder, greedier.
On this hot afternoon in April 2017, he also knew to keep his distance. It’s one thing to inspect stolen property; it’s quite another to get mobbed by it and pumped with venom. And this property was zipping chaotically through the cloudless sky, unhealthy and irate. Even cracking a window surely would have spelled disaster, he said—”like trying to put toothpaste back in the tube.”
Torres had been summoned here by Alexa Pavlov, a Missouri-based beekeeper who sat in her own rental car nearby. Two days earlier, she’d learned that a $50,000 cluster of her hives, recently stolen from a neighboring county, might well be sitting in this very field. She’d dropped everything, boarded a red-eye to California and driven straight from the airport into the state’s agricultural epicenter. She couldn’t afford not to.
Groggy and impatient, she stepped out of her car and set off toward the boxes. Torres watched in horror as she marched into a haze of bees, poking through hives and snapping photos. Before long, she returned with shots of her initials etched onto the bottom of a pallet—proof that her property was here.
Nearby, Pavel Tveretinov, a thin 51-year-old Sacramento man, was moving through the field, tending to hives in a protective suit. Pavlov confronted him, she later said, and he denied stealing anything. Before long, deputies from Madera County, where Pavlov’s bees had first gone missing, arrived on the scene. They doubted Tveretinov’s account and put him in jail that evening.
Word of the discovery, and the arrest, spread quickly through America’s small commercial beekeeping community. In the days that followed, Torres’ department received dozens of calls from across the country. Beekeepers wanted to know whether their hives were among those recovered—at this chop shop or at three others authorities found later, connected to Tveretinov and alleged accomplice Vitaliy Yeroshenko.
It was the largest bee heist any of them had ever heard of. Perhaps the largest in US history.“Some of them were like, ‘Well, I had beehives that were stolen three years ago.’ ” Torres said. “Some five years ago.”
By the time Torres and his team got a handle on the totals, they were dealing with 2,500 hives, worth nearly $1 million, some stolen from orchards hundreds of miles apart. This was much more than an impulsive theft: It was the largest bee heist any of them had ever heard of. Perhaps the largest in US history.
Leave any city in the Central Valley, heading in essentially any direction, and it won’t be long before you hit the almond orchards. They stretch for miles, in neat rows of alien emerald, butting up against dust-beaten truck stops and boxy McMansions. Some host campaign signs for local politicians; others are cross-hatched by roads whose names are simply letters because no one, evidently, had the time to get fancy.
California’s total almond acreage has nearly tripled in the past 20 years, a spike due in large part to foreign demand. At the moment, there are about 1 million acres of nut-bearing trees in the state, with an additional 330,000 on track to start producing over the next four years. The trees produce well over 2 billion pounds of nuts per year, and they’re sucking down the valley’s aquifers at a rapid pace.
Such growth has driven a near-manic demand for honeybees, which are crucial for what has become the largest managed annual pollination event in the world.

Fresno County Deputy Sheriff Andres Solis examines unclaimed stolen hives piled on a trailer. The number of reported bee thefts in California dropped significantly after Pavel Tveretinov and Vitaliy Yeroshenko were arrested in 2017.
“They always say in law enforcement, ‘What you know is one thing; what you can prove is another,’ ” said Andres Solis, a Fresno County sheriff’s deputy who has worked on the case. The evening he first saw the field where Tveretinov was arrested, he’d been on the job roughly a month. Today, he has a deep understanding of what bees, and bee theft, mean to California.
“It’s not just the property itself that they’re out,” Solis said. “It’s also the man hours spent bringing these bees up and making the hive healthy. … You get your bees back and they’re nothing like they were before.”
One morning before leaving Fresno, I drove an hour east, to one of the sites where authorities discovered hundreds of boxes of stolen hives. I wanted to see firsthand what an illicit bee operation looks like and, a year after the arrest of Tveretinov and Yeroshenko, what had become of the insects they’re accused of stealing.
The field was so remote that it didn’t have a proper address. To point me there, Torres dropped a pin on Google Maps, then recited from memory a short soliloquy of landmarks. I left early in the morning, hoping to evade the heat. But by the time I arrived, it was close to 100 degrees.
The spot was perfect for keeping bees: an overgrown field, about an acre long, nestled between an orchard and a man-made canal. It was close to a main road, but completely hidden if you’re speeding by at 60 mph.
Inside a perimeter of rusty barbed wire, hundreds of bee boxes sat in squat stacks. Just like the ones Torres described, these were painted a variety of colors. I stood near the perimeter, watching as thousands of bees launched from their hives, cutting through the scorching air.

This is one of the sites in California’s Central Valley where authorities discovered stolen hives. Pavel Tveretinov and Vitaliy Yeroshenko are facing a slew of charges, including possession of stolen property and theft.
Near the boxes was an abandoned van, a couple of bicycles, a flatbed and an old Coachmen RV. A year after Tveretinov’s arrest, some beekeepers still had not retrieved their hives. It is, after all, quite costly to ship bees across the country with no guarantee they’ll arrive in the condition you’d delivered them. For some, getting their property back wasn’t worth the gamble.
Up an embankment just yards away, cars roared past on a two-lane highway. A curious driver could easily have pulled over and peered into the field, spotted the makings of an alleged criminal enterprise whose size and peculiarity would be virtually unprecedented in California. One deputy said he’d sped past this field dozens of times on his way to headquarters. He’d never stopped.
“There’s bees there,” he said. “But you don’t think nothing of it. It’s bees. It’s pretty common to see beehives.”
I got as close as any bee novice probably should. Watched the stolen property zip through the air, folding in and out of kaleidoscopic clouds. Then I headed back to my rental car and began the long drive home, through miles and miles of almond trees.
This story was published in collaboration with The Journal of Alta California. Read more at altaonline.com. 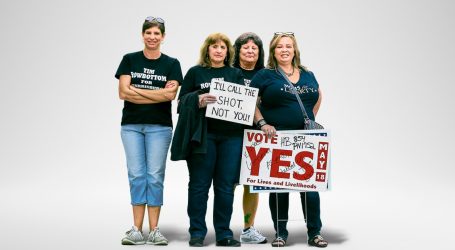 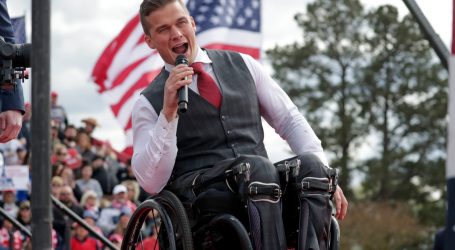 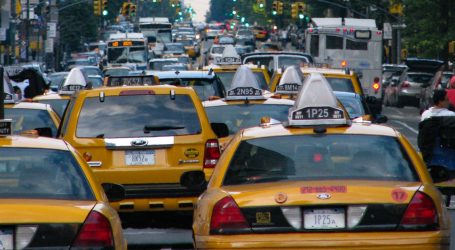