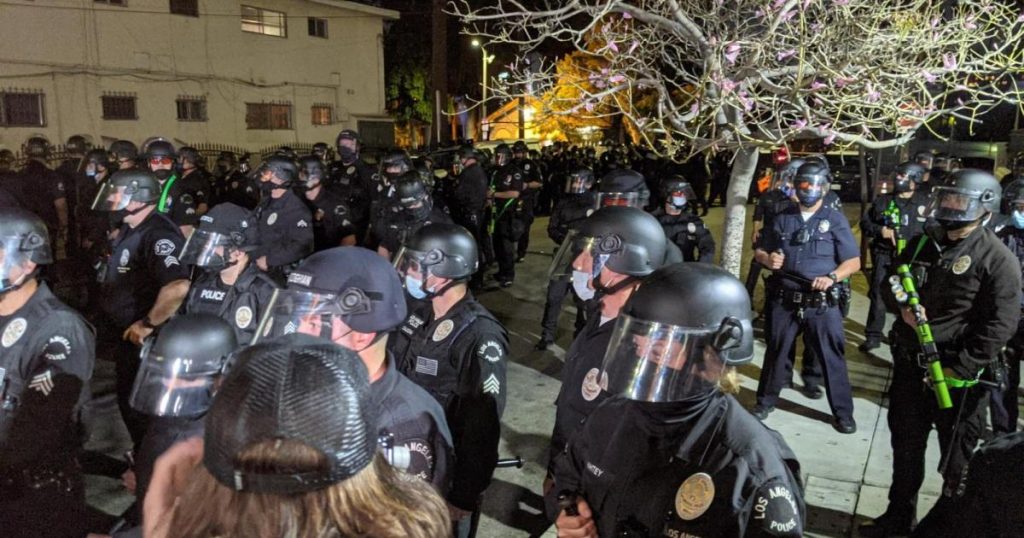 Dozens of police officers line up in front of Echo Park. Sarah Zimmerman

Let our journalists help you make sense of the noise: Subscribe to the Mother Jones Daily newsletter and get a recap of news that matters.On Thursday evening, around 200 hundred people arrived at the corner of Sunset and Lemoyne in Los Angeles’ Echo Park. Under a cool, cloudy sky, they raised signs that read “Services Not Sweeps” and “Housing is a human right.” For years the neighborhood has been at the center of citywide conversations around gentrification and housing insecurity. This week, all that discourse came vividly to life.
The protesters were there for a vigil in support of the more than 100 unhoused people who—until that night—had called Echo Park their home. That evening advocates for the unhoused directed their anger not only at the LAPD but at city council member Mitch O’Farrell, who oversees District 13 and who tried to clear the park last year only to be thwarted in his efforts. On Wednesday, the Los Angeles Times had broken news of O’Farrell’s quiet plans to close the park for minor renovations like painting the bathrooms. To activists and park residents, this was coded language that could mean only one thing: sweeping the tent community that, since taking root in the park in November 2019, had become a sort of city unto itself.
As the sky darkened, protesters formed a line in front of cops in riot gear who were blocking the entrance to the park; earlier that morning, the city had erected a metal fence around the park and begun relocating park residents. I saw two officers step onto the lawn of Angelus Temple church with cameras. Protesters booed as the police filmed them; some flashed strobe lights at the police in dissent. Around 8 p.m., police declared an “unlawful assembly”—at least I think they did. Barely anything was audible over the beat of the protesters’ drums.
Cops then began to push protesters away from the park, and it was clear to me that they were trying to kettle us in. Within minutes a second fleet of police ran out from a neighboring alleyway and surrounded protesters. I managed to escape, fearing perhaps selfishly what might happen to me, a young Black trans reporter with a flimsy makeshift press pass. From the stoop of a house down the street, I saw officers pointing green beanbag shotguns at people and shouting at them for refusing to disperse in time.
Later, the final tally would show that LAPD had arrested over 180 people—including four of my friends—and at least 13 journalists from the Los Angeles Times, LA Taco, Knock LA, and others. A few National Lawyers Guild observers were also detained. Los Angeles authorities have grown increasingly hostile toward journalists in the past year. In September, while covering a protest crackdown, KPCC reporter Josie Huang was slammed to ground by county sheriff’s deputies despite repeatedly announcing she was a member of the media.
This latest confrontation had been brewing for days. Earlier this week police and park rangers announced that everyone who lived in the park would have to vacate by 10:30 Thursday night. At a press conference Thursday morning, O’Farrell touted his office’s success in securing housing for 166 park residents through the city’s COVID housing initiative, Project Room Key.

This morning, I announced that we have now sheltered 166 people experiencing homelessness at Echo Park. The work to provide shelter to anyone who wants or needs it at the lake continues at this very moment. https://t.co/B29fwfIL15
— Mitch O’Farrell (@MitchOFarrell) March 25, 2021

But many residents and activists have accused O’Farrell of falling short on his promises. Responding to the council member’s statement that all of the park residents had received housing, one former resident named Gustavo told tenants’ rights organization Street Watch LA, “They’re lying.” He said: “They convinced me that they have rooms available but once you come out, they don’t. They have hotels all the way in Downey”—a city about 15 miles south of Echo Park—”but not around here. They said I have to wait. I’m on the waiting list. Right now I’m going to sleep on the streets. I have nowhere to go.”
Albert Corado, an organizer with the NOlympics LA and the People’s City Council, believes O’Farrell neither understands nor cares about the needs of the unhoused community and instead is trying to curry favor with “rich white homeowners.” Corado also cited O’Farrell’s campaign contributions—thousands of dollars of which come from police officers and real estate developers, according to data from the Los Angeles Ethics Commission—as evidence that the council member’s values are in direct opposition to the needs of the most vulnerable people in his district.
“People are being housed for a few nights, maybe a week or two. They’re going to be displaced and told to leave as they always are. If they go to shelters, it’s the same deal. And now they don’t have their home,” Corado said. “Whatever solution has been given to people, it’s temporary. It’s not supposed to get you off the street or get you a job or a downpayment on an apartment. It’s just meant to get you out of sight and out of mind—out of the park.”
Corado plans to run against O’Farrell in 2022, by which point the council member will have been in office nine years. In 2018, his sister Mely Corado was shot and killed by police while at her job at the Silver Lake Trader Joe’s. Corado figured the best way to remember his sister and “finish her work” was to organize a campaign devoted to defunding the police.
“The way that the police responded, the way that they reasoned why they shot into a crowded grocery store, woke me up to how all of these things are connected,” Corado said.
Lil KalishFor nearly a year, the Echo Park tent community had transformed one of the city’s most iconic parks into an autonomous commune. Park residents built a community garden, and erected showers, medical tents, and a functioning kitchen. Failed again and again by a city that would not house them, they created a space for healing amid the trauma of homelessness, drug addiction, and mental illness. Even as the community faced eviction, residents found love and support within the park. The Los Angeles Times reported that one unhoused couple married a few days before sweeps were scheduled to happen.
“The biggest pandemic in years actually turned out to be a blessing for us,” Echo Park residents wrote in a statement. “Without the constant LAPD and city harassment uprooting our lives we’ve been able to grow. To come together as a community, not just unhoused but housed as well and work together for the mutual aid and benefit of each other.”
Now, with a fence wrapped around its perimeter and the two remaining residents arrested as of Friday morning, the future of the park remains uncertain. Mayor Eric Garcetti applauded the conclusion of the operation to close Echo Park, telling reporters this has been the “largest housing transition of an encampment ever in the city’s history.”
But as the pandemic continues to displace people throughout Los Angeles— and the entire country—activists worry about what these forced evictions mean for the longterm care of unhoused communities. They worry for their own safety as well. (One protester reported that his arm was broken by an officer with a baton during Wednesday’s clash with the police.)
“Whatever the city didn’t give them, they found for themselves,” Corado said. “It was a righteous community of people who cared about each other. And if we lose that, we lose not only some character here in Los Angeles, but we are losing a part of the soul of Los Angeles.” 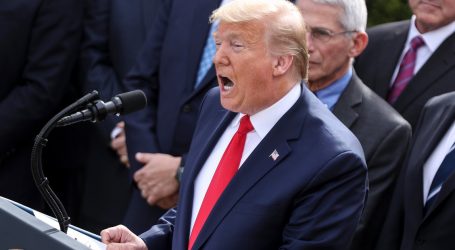