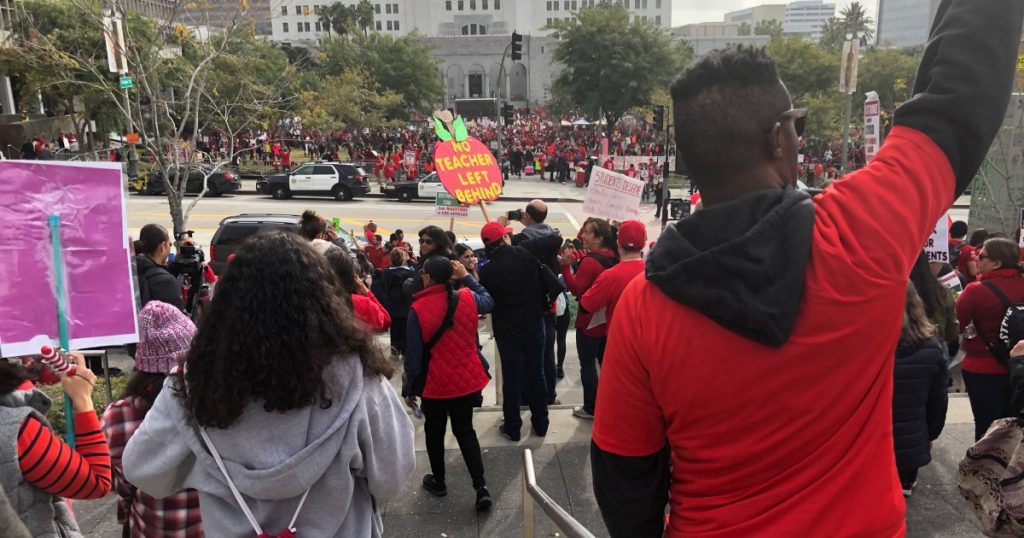 On Friday, the fifth day of this year’s historic strike teachers’ strike in Los Angeles, an exodus of students, parents, teachers, and supporters flooded out of the nearby Metro station, and stomped onto the muddy greenery at Grand Park in downtown LA.
With the first hint of sunshine in days, the mood at Grand Park was light-hearted, with music and speeches blaring from a stage outside Los Angeles City Hall, even as tense negotiations trudged on between the United Teachers Los Angeles and the Los Angeles Unified School District just steps away. Offstage, some parents watched on as their young children bounced around the park’s playground. The union estimated that more than 60,000 people attended the rally.
At one point, Tom Morello, the guitarist for Rage Against the Machine, strummed “This Land is Your Land,” shouting “see you all on the picket lines” before he left the stage, leaving UTLA president Alex Caputo-Pearl to pump his fist for the crowd.
Huddled with his colleagues, Mack Scott, a self-described product of Los Angeles schools, was recalling the last time there was a citywide strike in LA. In 1989, Scott worked at an elementary school in east Los Angeles when teachers went on strike for nine days. “Back then, if you were a teacher, you didn’t have automatic recess,” he says. “You had to do yard duty sometimes. Classes were big then, too.” But today, he says morale was higher among teachers.
Scott now works as a special education instructor at 52nd Street Elementary School, just south of the University of Southern California’s campus, and says the lack of support staffers at his school is hurting kids. “We have students who come from homelessness and foster care,” he says. “We have a lack of resources for them as far as psychiatric, social workers, or counselors.” He didn’t want to blame charter schools solely for problems in the district, but noticed that students from his elementary school now would leave to attend nearby charter schools but get sent back.
“Things have changed,” he added. “You’re putting so much emphasis on teachers with test scores and assessments, yet you also have to be social workers, psychologists, nurses—you have to do it all with the students. Which we do willingly because we love the students. But it shouldn’t have to be that way.”
After the rally settled, Elisa Mejia recalled how, as a teenager at Franklin High School, she was uninformed about the plight her teachers faced when they walked out of schools in 1989.
“Now, my kids know everything,” Mejia, a part-time adult education teacher, says decades later. For the last week, she’s mostly gone to the picket line at her son Kiniche and daughter Erendira’s school, Arroyo Seco Museum Science Magnet School in northeast Los Angeles, to support their teachers.
Mejia explained that, two years ago, she took her kids out of Sunrise Elementary in Boyle Heights because her daughter had gallbladder issues and needed more consistent access to medical care during the school day. Sunrise, she says, didn’t have a nurse available for more than one day a week, and her kids’ new school had one available for three days. One of the kids made a sign that read, “Being a teacher is a revolution.”
Mejia’s 10th grade daughter Valentina stayed out of school this week, too, and walked the picket lines with her teachers at Ramon Cortines School of Visual and Performing Arts. Mejia says her daughter struggles in her math class that has nearly 40 kids in it. “All these teachers are doing extra to meet the needs of their students. But can the district do extra?” Mejia asked. 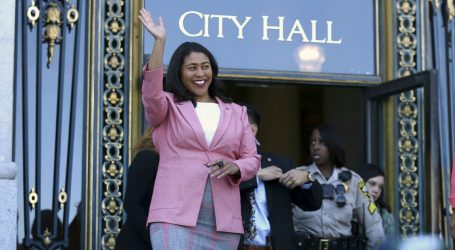 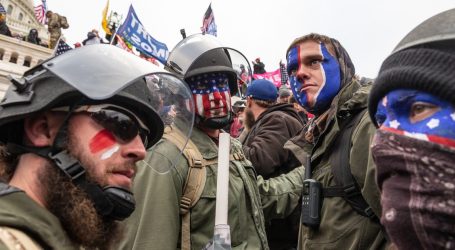