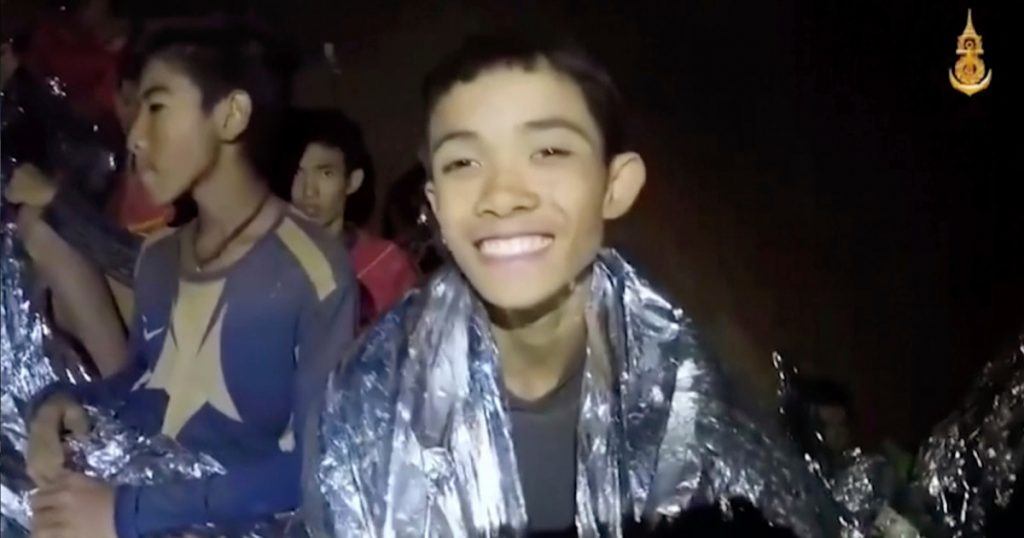 A boy smiles as a Thai Navy SEAL medic helps injured children inside a cave in northern Thailand, where a group of boys and their soccer coach were trapped.Royal Thai Navy Facebook Page/AP

The kids wrote about their favorite meals, their school obligations, and helping their parents at the store. The families told them they loved them, and managed to parent from afar: “Cover yourself with a blanket—the air is cold.”
The messages delivered between a soccer team trapped inside a flooded cave in Thailand and their relatives gave intimate insight into an 18-day ordeal that captured the world’s attention—and ended Tuesday when the last of a group of 12 boys and their coach were saved. The letters, posted by the Thai Navy SEALs and annotated by the BBC, showed both parents and children sharing messages of love and reassurance.
“Dad and mom are still waiting to arrange your birthday party,” said a letter addressed to Night, one of the boys. “Mom knows that you can do it. Mom and dad and everyone is giving you support.”
“Don’t worry, we’re all strong,” said one letter from the boys. “Once we’re out, we want to go home immediately. Teacher, don’t give us lots of homework!”
In another, a mother told her son not to worry: She’d be right in front of the cave when the boys got out.
With all members of the team now safe, the letters show the kids’ and their families’ resounding resilience, hope, and lightheartedness—even in the grimmest of circumstances.
Looking for a break from the political sniping? This week I’m focusing on big ideas that could help the world—and a few people who turned adversity into opportunity. There’s also good news about an amazing coral reef system. Read on! Recharge is a weekly newsletter full of stories that will energize your inner hellraiser. You can sign up at the bottom of the story.

After #BBQBecky called the cops on him, he decided to run for office. He was grilling in a public park when he became famous—because a white woman, infamously known as #BBQBecky, called the cops on him. Now Kenzie Smith, co-founder of a local music and culture magazine, is running for Oakland City Council to help renters, the homeless, and job-hungry youth. He also has been nominated for the city’s park and recreation advisory committee. Though he faces an uphill battle, Smith is taking his city council run in stride. “Win, lose, or draw, it doesn’t really matter. That’s not what it’s about,” says Smith. “What it’s about is trying to get these young voters to vote, to actually have their voice heard, and also to continue to inspire the younger generation to say, ‘If he can do it, then I can do it, too.’” (Mother Jones)

A newspaper to help Ohio inmates rebuild their lives. Tracy Brumfield wanted to help inmates succeed after being released from prison. So she started a newspaper, called RISE, that shares resources on jobs, places to live, and how to adapt to the outside. The paper also tells inmates’ personal stories of struggle and hope. “People who are in jail, especially those for the first time, are scared and ashamed. They don’t know how to ask for help or where to get it,” Brumfield, 51, told CNN. She would know—Brumfield struggled with addiction and served time for violating parole. After beginning in August 2017, RISE is now on its ninth issue, and is distributed to correctional facilities, food banks, health clinics, and shelters. (CNN)

The Big Idea: Give employees time off on Election Day. A 2014 study showed that 35 percent of eligible voters said being unable to get time off from work or school prevented them from casting ballots. Patagonia’s CEO, Rose Marcario, came up with a solution: Let’s give folks the day off to vote. Patagonia gave its employees the day off for the presidential election in November 2016 and will do so again this year for the midterms. It’s also calling on other businesses to join in. “All of us benefit from living in a free society,” Marcario wrote. “That’s what allowed us to build businesses in the first place, and it’s what guarantees us the right to defend our air, water, and soil. So this year my message to everyone at Patagonia and all my fellow business leaders is: Let our people go vote.” On Thursday, Gale Anne Hurd, producer of The Walking Dead, The Terminator, and Aliens, said she would follow suit. She urged fellow entertainment chiefs to do the same. (Fast Company)

Another Big Idea: How to save lives from opioid abuse right now. It’s a seemingly simple change, and medical officials argue it could help stem an epidemic that kills 115 Americans a day: Make methadone available through primary care, just like the US already does for two other anti-opioid medications. The drug, a synthetic opioid that helps reduce cravings and other withdrawal symptoms, has been available by prescription in primary care clinics for decades in the UK, Australia, and Canada. But in the US, methadone can only be distributed in special clinics, which are often located in places underserved by public transportation. How many lives could be saved? A 2017 study of opioid deaths found that patients treated with methadone were one-third less likely to die than those who did not receive the medication. (STAT)

A coral reef that got better. About 200,000 people depend on the Belize Barrier Reef, a 190-mile-long reef system home to 1,400 species, including manatees and hawksbill turtles. After decades spent on UNESCO’s list of imperiled World Heritage Sites, the reef is now no longer in danger, says the UN agency. Following public pressure, the Belize government ordered an indefinite halt on all oil drilling and exploration in the nation’s waters—and helped protect the reef’s future. (HuffPost)

Have a Recharge story of your own or a suggestion on how to make this column better? Fill out this form or send a note to me at recharge@motherjones.com. Have a great week ahead and make sure to sign up for the newsletter below. 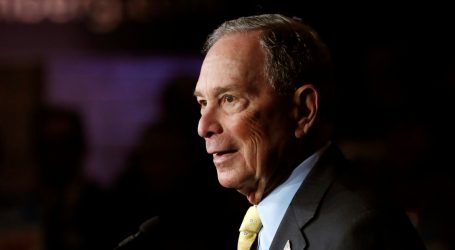