Several residents are left with nothing after a fire ripped through their Lithonia apartments Thursday afternoon.

DeKalb County Firefighters responded to the call just before 5pm Thursday at the Fontaine East apartments on Parc Lorraine.

“There are approximately eight units that are affected,” said DeKalb County Fire Captain Eric Jackson. “Two due to heavy fire damage, two more due to heavy water and smoke damage and then the other four have light to moderate smoke damage.”

Some people were home when the fire broke out, including Kenneth Harrison and his one-year-old twin boys. Harrison said all of sudden he heard someone banging on his door.

“Get out, get everybody out, there is a fire,” is what Harrison said he heard.

Harrison said he grabbed his young sons and ran outside.

“The smoke comes in so thick, black just terrible cloud, I couldn’t breathe so I am thinking about the kids,” said Harrison.

Harrison’s neighbor said she heard someone banging on her door too, but no one knows who it was.

“I look out the front door and I couldn’t get out, there was so much smoke so went out the back door,” said Arthidrea Williams.

The address where the fire is located is 3092 Parc Lorraine. Eight units of the apartment complex are involved, according to officials.

. @DCFRlocal1492 working fire at Lithonia apt complex on Parc Lorraine-4 of 8 units destroyed. No one was hurt @FOX5Atlanta pic.twitter.com/x1I6rhZnhR

The Red Cross is assisting the 11 people displaced by the fire. Residents said they are grateful everyone was able to get out and no one was hurt. 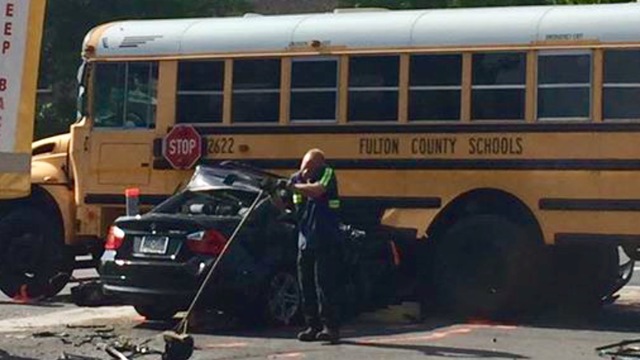