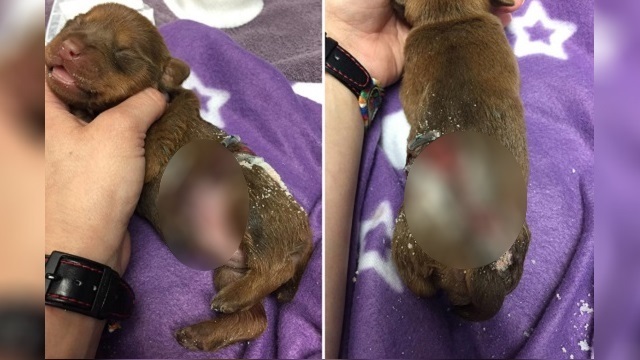 A tiny puppy named Ember is fighting for her life after someone apparently threw her from a moving vehicle.

She is barely five days old, her eyes closed and medicated with pain killers. It’s round the clock care for Ember, who according to Dr. Joanne Roesner is suffering from a projectile injury.

The puppy’s skin was peeled back from her shoulders to her rump. Maggie Smith, a vet tech at Loving Hands is also a volunteer with Bosley’s Place, a nonprofit dedicated to caring for puppies.

Ms. Smith is caring for Ember on a round the clock basis, feeding the pup every two hours as well as medicating her with fluids under the skin.

She said Ember is not out of the woods yet.

Maggie Smith said a dad and his son driving on Stone Road in Fulton County found the puppy on the side of the road, put it in a Sprite box and brought it to fire station 31 nearby.

Ms. Smith said firefighters contacted Fulton County Animal control who brought the pup believed to be a Rottweiler to the nonprofit.

She said the firemen had named the puppy Backdraft, but the volunteers changed it to the more girly Ember.

Now, these dedicated groups of rescuers are hoping Ember’s story stirs up the community to find who ever hurt this defenseless animal.

Ember’s rescuers are asking anyone who may any information on Embers’ abuser to contact authorities.

And they also wonder what may be the fate of the other puppies born with Ember.

ADOPTION: Bosley’s Place said Ember won’t be ready to go home for at least seven weeks, but they are happy to process adoption applications in advance. For more on adoption click here.