Black Politics
9 hours ago-Trump’s Dinner Fiasco Was a Win for Fascists Playing the Long Game
9 hours ago-Herschel Walker Once Said He Was the Target of Racism. Now He Claims It Doesn’t Exist.
9 hours ago-“Something Needs to Change or Else We Will All Quit”
9 hours ago-The Tragedy of the Oxford High School Mass Shooting Deepens
1 days ago-Oath Keepers Founder Convicted of Sedition in Capitol Attack
Local News
January 6, 2017
Author: jwelcome

As law enforcement around Fulton County hope to crack down on “slider” thieves preying on drivers at the pump, one woman says thieves tricked her into running out of her BMW so they could steal it, then dumped it after it was destroyed by bullet holes.

“I made a conscious decision I would not be a victim. But I have been,” said Elesha Neriddin-Johnson, who has been paying attention to the warnings of law enforcement, to never leave their keys in an unoccupied vehicle while they pump gas.

Now her BMW is destroyed by bullets, after East Point Police said criminals took her vehicle on a crime spree.

Neriddin-Johnson said she was inside her car in the driver’s seat, while waiting for her son in the parking lot of the BJ’s off Camp Creek Parkway, when a car pulled up beside her; minutes later, she heard someone trying to open a door, and believed the person was her son.

“I unlocked the door. I’m thinking it’s my son… there’s a guy in my car, and he reaches for my purse. I jump out… another one slides out the car, he walks around, he jumps into my car,then he drives off,” Neriddin-Johnson said.

East Point Police said the thieves used her vehicle to engage in a robbery off Campbellton Road, that same night, at a local gas station; the ordeal ended in a shootout, with a bullet striking a MARTA bus. Neriddin-Johnson said her vehicle was struck close to 20 times.

East Point Police are still looking for the thieves, and are working to tie them to other gas station thefts and carjackings across the South Fulton County area.

NEXT ARTICLE: Vigil for Clayton County teen gunned down on New Year’s Eve 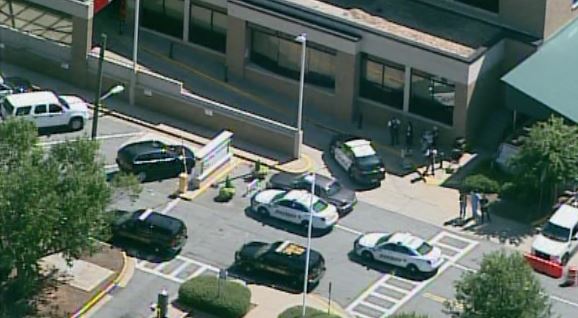