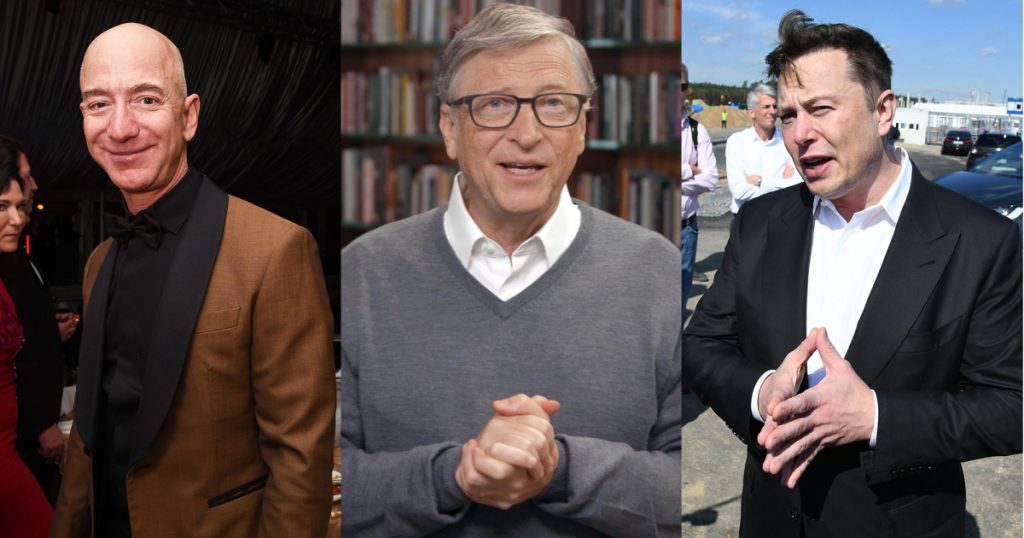 Let our journalists help you make sense of the noise: Subscribe to the Mother Jones Daily newsletter and get a recap of news that matters.This story was originally published by the Guardian and is reproduced here as part of the Climate Desk collaboration.
The latest must-have for America’s ultra-rich isn’t another mega yacht or space program – it’s a plan to save the world from the climate crisis.
Elon Musk, founder of Tesla and one of the richest people in the world, has pledged $100 million in prize money for technology that would best capture planet-heating carbon dioxide from the atmosphere. Jeff Bezos, the Amazon founder who tops the global rich list, has vowed to give out $10 billion to worthy climate initiatives. And Bill Gates, another multibillionaire and Microsoft co-founder, has recently released a book on how to drive emissions to zero.
Together, the three men have an estimated wealth of $466 billion and some of the biggest personal carbon footprints on the planet. They are also emblematic of a Davos-centric worldview that sees free markets and technological advancements as the answer to an existential emergency already upending the lives of millions of people.
“I think more like an engineer than a political scientist,” Gates declared in his new book, urging measures such as a complete shift to synthetic beef. Musk has described the use of fossil fuels as an “insane experiment” but has also called public transit an uncomfortable “pain in the ass.”
“What excites these folks is technology and innovation,” said Bill Weihl, executive director of Climate Voice who previously led clean energy and sustainability divisions at both Google and Facebook. “They compete with each other, if only subconsciously. The mindset is to invest funds in a bunch of things and hope a few will really succeed.”
Fresh thinking will be needed to eliminate emissions from certain areas with few current alternatives, such as steel-making and aviation, as well as to suck up CO2 we have already emitted. But, as Weihl points out, scientists have made clear humanity must urgently slash emissions in half within the next decade to avoid disastrous global heating.
“There’s a natural tendency to find the single silver bullet to a problem, but with climate change it’s more like silver buckshot,” he said. “We need to deploy the heck out of renewables and electric cars and heat pumps and everything else today, like crazy. We don’t have time to only develop longer-term options.”
Climate campaigners have welcomed the interest and financial heft of the US’s wealthy elite following a year when record wildfires and hurricanes pummeled a country suffering the escalating consequences of global heating. But some also point out that the most vulnerable Americans could benefit right away from less glamorous interventions, such as more public green space and shade in cities to escape rising heat.
“It’s great they are coming up with new ideas, but I think first and foremost we need to ensure communities affected first and worst are resilient, rather than picking up the pieces afterwards,” said Adrienne Hollis, an environmental justice campaigner at the Union of Concerned Scientists. “If you aren’t exposed to something that many poorer people and people of color are exposed to, you probably aren’t thinking about it as much.”
The billionaires will also have to garner broader societal buy-in to move their ideas forward. “What they are doing is well-intentioned and impactful,” said Tom Steyer, himself a billionaire and former Democratic presidential candidate. “I’m glad they are doing it. But we won’t succeed or fail based on just a few people. It will be because everyone got on board, like in world war two.”

What he’s doing: Musk’s day job is at the forefront of helping build a new low-emissions world, with Tesla, maker of electric vehicles and home batteries, now the most valuable car company in the world. The newly styled “technoking” also recently pledged $100 million to the winner of the X Prize for carbon capture, which he said would go to those able to “build real systems that can make a measurable impact and scale to a gigaton level.” Teams will have to show how they can remove CO2 from the atmosphere and oceans and lock it away permanently. “Whatever it takes,” Musk said. “Time is of the essence.”
Will it work? Scientists have made clear it will be extremely unlikely to bring emissions down to zero quickly enough without some sort of “overshoot” that will require emitted CO2 being removed from the atmosphere, either through a mass reforestation effort or machines that are able to suck the gases directly from the air to be either buried underground or put to some other use.
The problem is that such technology is relatively new and will need to be scaled up massively to do the job – one study found that limiting global heating to 1.5 degrees Celsius above the pre-industrial era will require capturing about 810 billion metric tons of CO2, equivalent to about 20 years of current emissions. Currently, carbon removal systems are fairly expensive and require a lot of heat, and therefore emissions-causing energy, to operate.
“Elon Musk is a techno-optimist so it makes sense he’s going for carbon capture,” said Andres Clarens, an environmental engineer at the University of Virginia who has researched carbon capture options. “You could create a new widget but scaling it up is the real challenge; also, Musk also doesn’t touch on what to do with the CO2 once you get it. But if we can solve these things our toolkit to deal with climate will become far more powerful.”

Once one of the world’s most ruthless businessmen, Gates has spent the last 20 years using his fortune to tackle big issues including poverty, disease and climate change.
Breakthrough Energy, his investment fund, includes a bushel of billionaires in its backers including Mike Bloomberg, George Soros and Mark Zuckerberg. It invests in high-risk, long-term projects aimed a getting the world to net zero.
Among those investments is a plan to convert seawater into microscopic particles to be sprayed into clouds, increasing their whiteness and therefore their ability to reflect more sunlight back into space, reducing global warming. The geo-engineering scheme could fundamentally change the planet, whitening skies and changing weather patterns and ocean currents. He also has investments in new nuclear power plants and more traditional “green” tech like solar and wind.
His new book, How to Avoid a Climate Crisis, calls for tax changes and big investment from governments to tackle what he calls the “green premium,” the cost difference between a product that emits carbon and one that does not.
Will it work? Gates has many, many ideas and is a tireless advocate for the net zero cause. But his big ideas may not pan out – or prove politically acceptable. Even someone of Gates’s wealth and influence may struggle to change the global political landscape. And, again, his advocacy of the free markets that did so much to create the crisis we now face undermines his legitimacy.

What he’s doing: Carbon removal systems already exist in nature, of course, in the form of trees, soils and wetland. Yishan Wong, who was chief executive of Reddit, was inspired by an academic paper he read on how mass reforestation could help stave off the climate crisis. What if, he thought, he could aid an effort for the world to plant 1tn trees, which would cover an area larger than the US and Mexico combined?
Four years later, Wong heads Terraformation, an organization that helps plan, nurture and implement reforestation efforts. Starting in Hawaii, where Wong created the world’s largest solar-powered desalination system to help sustain new stands of trees, the venture has helped establish thousands of acres of new forest in countries as diverse as New Zealand, Ecuador and Uganda.
“We are bringing a fusion of forestry expertise and Silicon Valley scalability,” said Wong. “Other solutions need that risk of R&D and then a prototype and then scale, whereas trees have been around for a long time. They just need to be scaled. I thought about what could I do best to help work at huge scale, with reliable components.”
Will it work? Trees, particularly the large, old growth individuals that have towered in places such as California for hundreds of years, store a huge amount of carbon along with soils that absorb them when they die and decompose, collectively holding about 80 percent of all the carbon currently in the Earth’s atmosphere.
An immediate priority, according to ecologists, is to prevent logging that is currently rampant in crucial carbon stores such as the Amazon rainforest. Globally, an area of forest the size of the UK is removed each year to make way for farmland, roads and urbanization.
Planting 1 trillion trees would draw down a huge amount of CO2, scientists have said, although others have raised concerns – over the vast amount of land needed, whether the type of forests would actually support dwindling biodiversity and the decades it would take for these trees to grow to a point where a significant amount of carbon is removed. “We didn’t get to where we are now via natural processes and won’t get out of it via natural processes,” said Clarens. “The numbers don’t add up, there isn’t the land required for it.”
Wong said the land use issue can be solved by focusing on reforesting unproductive land currently not used for anything else, as well as by irrigating barren, desert areas to establish trees there. “It appears we don’t have enough land but you can create additional land by converting these areas,” he said. “If we wait 100 years maybe this won’t be an option but it is now, so let’s do it.”

What he’s doing: In November, the Bezos Earth Fund doled out the first $791 million in grants to an array of conservation and climate solutions groups, in what Bezos said is just the start of his giving to combat what he has called “the biggest threat to our planet.”
Bezos also established a climate pledge for Amazon where the delivery behemoth would get to net zero CO2 emissions by 2040, through a shift to renewable energy and the purchase of 100,000 electric delivery vehicles. Dozens of other companies have vowed to emulate Amazon’s target, perhaps the most high-profile being IBM.
Will it work? The sight of one of the world’s largest and most powerful companies committing to climate action was welcomed by climate campaigners and has already proved influential with other businesses. Others, however, have highlighted the lack of detail in how Amazon will actually get to net zero emissions, while some of the company’s workers are unhappy that Bezos refused to sever contracts that provide cloud computing services to fossil fuel firms.
More broadly, the growing number of corporations making emissions reduction promises is offset by a lack of political muscle, according to Weihl. A recent report found that the US’s largest tech companies were spending comparatively very little on political lobbying. “Amazon was slow to get into the game but they are stepping up with the climate pledge,” said Weihl.
“But these tech companies are letting big oil dominate the policy debate. Big oil is fighting hard to weaken and delay policy while most other companies are sitting on the sidelines rather than twisting arms. They need to lean in and make sure lawmakers know this is an existential issue.” 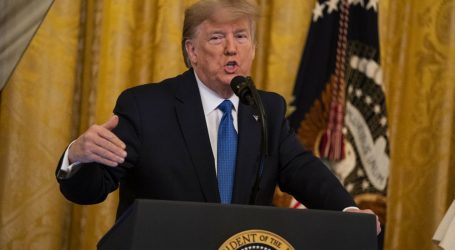 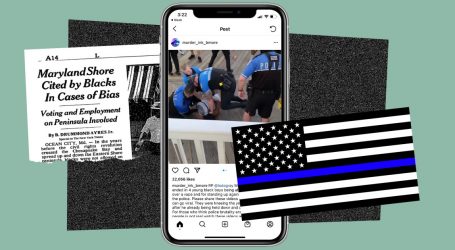 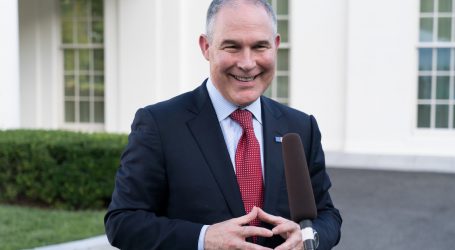