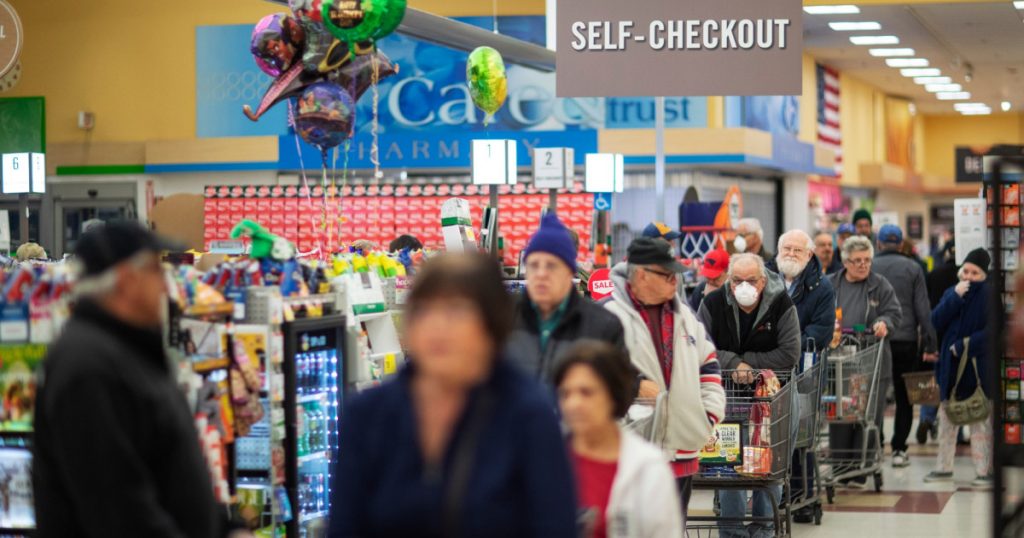 Shoppers wait in the checkout line at a Stop & Shop supermarket during hours open daily only for seniors in North Providence, Rhode Island. The dedicated shopping times at some grocery stores are designed to allow seniors, pregnant women and people with underlying health conditions to shop among smaller crowds and reduce their chances of acquiring the coronavirus. David Goldman/AP

For indispensable reporting on the coronavirus crisis and more, subscribe to Mother Jones’ newsletters.While grocery workers across the country stocked shelves and rang up pantry items for a daily onslaught of customers and delivery couriers over the past few weeks, they’ve faced a higher-than-average risk of exposing themselves to the coronavirus. Now the virus is starting to kill them. At least six employees of grocery stores—including FoodMaxx, Trader Joe’s, Giant, Walmart, and Market Basket—have died after testing positive for COVID-19 in California, New York, Maryland, Illinois, and Massachusetts.
Some states, in an attempt to better protect these workers, have classified them as emergency personnel, which qualifies them for free child care. Yesterday, the United Food and Commercial Workers Union and Albertsons, a Boise-based supermarket chain that also operates Safeway, Vons, and Jewel-Osco, launched a national campaign calling for action by both federal lawmakers and states to designate grocery workers as first responders.
The UFCW and Albertsons announced the campaign with a full-page ad in Tuesday’s New York Times aimed at “our nation’s policymakers and influencers,” according to a statement by the union. “The temporary designation of first responder or emergency personnel status would help ensure these incredible grocery workers access to priority testing, have access to personal protection equipment, like masks and gloves, as well other workplace protections necessary to keep themselves and the customers they serve safe and healthy,” said Vivek Sankaran, CEO of Albertsons Companies, and Marc Perrone, UFCW international president, in a joint statement.
On Wednesday, the UFCW sent a letter to the Centers for Disease Control and Prevention asking for mandatory federal guidelines during the coronavirus outbreak that would require grocery stores to implement social distancing and sanitation policies and provide workers with personal protective equipment. While some grocery chains have introduced safety measures like plexiglass partitions at cash registers, the changes have not been consistent across the industry. Sean Krane, a butcher at a Vons in Los Angeles County, told me last week that crowd control was an issue in his store. “It says 100 people on the front of the door, but there’s no one at the front door counting people coming in and out,” he said. “And customers don’t adhere to the six feet of distance at all.”
Workers at Whole Foods and Amazon as well as at the app-based food delivery companies Instacart and Shipt have gone on strike in recent weeks, demanding better sanitation conditions, pay, and benefits. Trader Joe’s workers are pushing a union organizing effort.
In late March, California grocery workers along with the UFCW launched a petition to Gov. Gavin Newsom calling for personal protective equipment, the right to wash their hands every 30 minutes, additional paid sick time, and guaranteed child care. California has since joined states like Minnesota, Vermont, and Michigan in extending child care benefits to grocery workers. Other states, including Connecticut, Massachusetts, and Pennsylvania, have issued executive orders to make grocery stores safer workplaces with occupancy limits and requirements for sanitation and social distancing.
This week, Senate Minority Leader Chuck Schumer (D-N.Y.) and other Senate Democrats proposed a $25,000 bonus, or an additional $13 per hour, to essential frontline workers, including grocery workers, as part of a “heroes fund” in the next coronavirus relief package.
“Essential frontline workers sacrifice daily for our collective health and well-being, and I, along with my colleagues, are fully committed to supplying these heroes the financial support they deserve,” Schumer said in a statement. 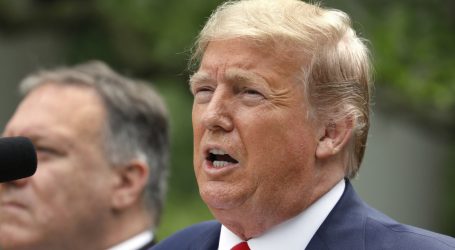