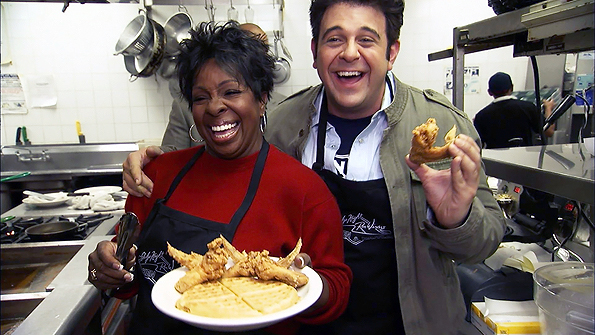 June 22, 2016
Author: jwelcome
The son of R&B legend Gladys Knight is wanted on charges of theft and tax evasion in connection with the popular Atlanta restaurants he runs in his mother’s name.

Chart-topping R&B legend Gladys Knight is famous for her chicken and waffles. But it appears the owner of the Atlanta restaurant chain that bears her name was cooking up more than country yard birds.

Georgia authorities reportedly smelled something fishy going on at the popular eatery and suspected the proprietor, Shanga Hankerson, was cooking the books. Authorities padlocked three locations in and around Atlanta on Tuesday, and issued seven warrants for his arrest. Hankerson is wanted on a myriad of charges—including theft, theft by conversion and tax evasion.

Knight, who lent her name and likeness to the business, is said to have no other connection and is not under investigation. Her son, however, faces numerous criminal and civil charges in connection with the case.

“Gladys Knight lent her name to her son’s restaurants in the Atlanta area, similar to a celebrity endorsement,” Knight’s spokeswoman Laura Herlovich said in a written statement. “Ms. Knight was not involved in any way with the operation of the restaurants, and she is sure that her son and his business partners will rectify the situation.”

Gladys Knight’s Chicken and Waffles in Midtown, the first of three restaurants, opened to great fanfare in 1997 and quickly became a popular brunch and late-night spot. Open until 4 a.m., late R&B star Aliyah, who was Barry Hankerson’s niece, as well as then-Mayor Bill Campbell attended the star-studded launch party.

There were notable problems along the way. The sparsely decorated restaurants made news in recent week after failing a health inspection.

Law enforcement escorted employees from the premises, but the move is said to be temporary and that the establishments will re-open under state receivership.

“It is never the Department of Revenue’s primary goal to shut down a business,” said the department’s Josh Waites, who oversees its office of special investigations. “We are working with Mr. Hankerson’s attorney to have the business up and running again as soon as possible.”