The federal deficit is going up, up, up:

The federal budget deficit ballooned rapidly in the first four months of the fiscal year amid falling tax revenue and higher spending, the Treasury Department said Tuesday….The deficit grew 77 percent in the first four months of fiscal year 2019 compared with the same period one year before.
….Lawmakers enacted sweeping tax cuts at the end of 2017, and those changes continue to reduce revenue flowing to the Treasury Department. Tax revenue for October 2018 through January 2019 fell $19 billion, or 2 percent, Treasury said, though there were major reductions in the amount of money collected from businesses. Treasury found corporate tax payments over the first four months of the fiscal year dropped from from $75.5 billion to $58.9 billion, a fall of roughly 22 percent.

Ah, yes, “major reductions” in revenue from corporate taxes. Let’s take a look at that:
Sadly, it looks like those tax cuts didn’t pay for themselves. Yet again. Maybe next time.
In addition to falling revenue, the deficit has increased because of higher military spending and higher Medicare spending. The Medicare thing is sort of unexpected. Maybe I’ll take a closer look at that later today. 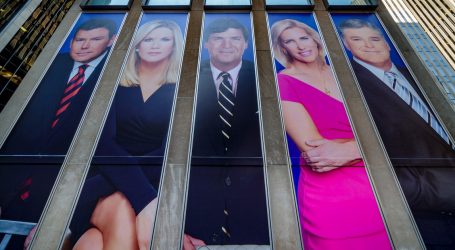