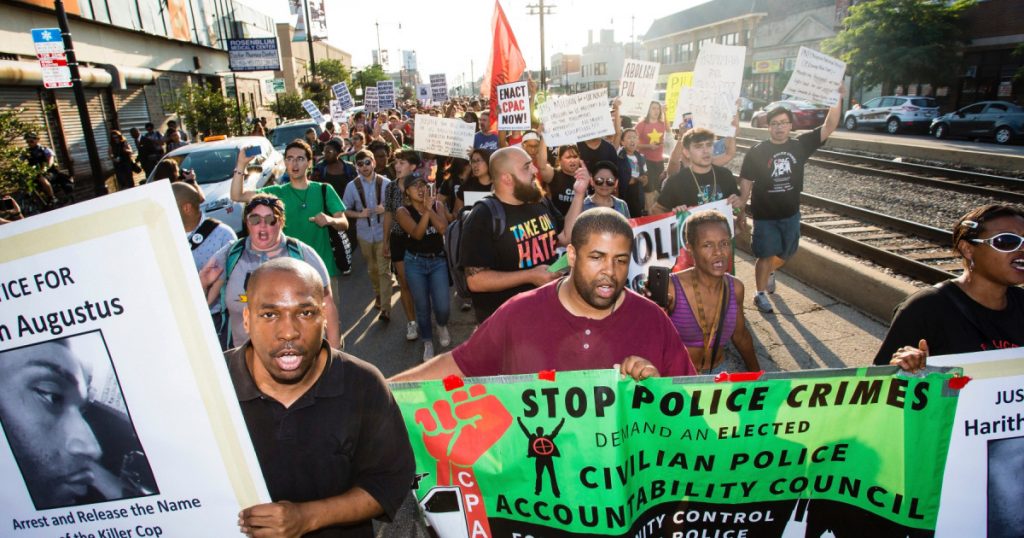 A protest over the police killing of Harith Augustus in Chicago on July 16, 2018.James Foster/Chicago Sun-Times/AP

A candlelight vigil was held Wednesday near the site where 37-year-old Harith Augustus was shot and killed by a police officer over the weekend, following three consecutive days of protests after the shooting on Saturday. The vigil comes a day after a judge announced the trial date for the former policeman who shot and killed African-American teenager Laquan McDonald four years ago, and after community members held a meeting to discuss how to manage unrest that could follow a potential acquittal in the trial.
Augustus, who was African American, was shot and killed by local officers on foot patrol near the barbershop where he cut hair. Police officials have implied the shooting may have been justified because Augustus was carrying a gun, but activists argue the shooting is more complicated, in part, because Augustus had a license to own one. Police officials attempted to curb outrage Sunday by releasing body camera footage of the incident, but the 45-second video—which does not include audio and is edited—raises more questions than it answers.
According to Chicago Police Department spokesman Anthony Guglielmi, officers stopped Augustus because he “exhibited characteristics of an armed person.” In the video, three officers approach him, while a fourth officer—whose camera captured the video—is not pictured. As Augustus shows ID to one of the officers, a second officer reaches for Augustus’ wrist and a third appears to attempt to block his path. Augustus pulls away, exposing a holstered gun on his right hip. At that point, the officer who shot him—who was still a probationary officer and had graduated from the police academy less than a year ago, Chicago police superintendent Eddie Johnson has said—draws his gun. Augustus darts for the street and, as he dodges a police cruiser that pulls into his path, his arm appears to move toward his hip. His body then twists as he stumbles and falls to the ground, apparently having been struck by gunfire.
The video freeze-frames on the moment Augustus’ gun is exposed, and then moves in slow motion as he evades the police cruiser and falls to the ground. It doesn’t include audio because, as Johnson explained Tuesday, officers’ body cameras only record sound after officers activate their cameras. Once activated, the cameras save the prior 30 seconds of visuals without sound. Augustus was shot during that 30-second window, so the recording of his encounter with police is silent.

Johnson has said a second recording captured by another officer at the scene also does not include sound—it’s unclear if the footage captured by the two other officers’ cameras does include audio. But activists have argued that audio of Augustus’ encounter with police is crucial to understanding why he was stopped, why an officer became physical with him, and whether the apparent attempt to detain him upon questioning was legal. Augustus had the required license to purchase and own a gun, Johnson has said, but not a concealed carry permit, which Illinois requires to carry firearms in public. Officers would not have known that when they stopped him, however. In an op-ed on Monday, the Chicago Sun-Times’ editorial board also wrote that audio is “essential for us to know how the officers engaged with Augustus and what they said to him before he fled.”
On Wednesday, William Calloway, a local activist who was also vocal in demanding the release of police dash cam video after the McDonald shooting, filed suit against the Chicago Police Department seeking all video and audio recordings from the cameras of the four officers on the scene of Augustus’ shooting. The suit accuses the department of releasing a “selective, incomplete, and edited recording” in order to “justify the shooting.”
“Illinois is now a concealed carry state,” Calloway told Mother Jones. “For a conceal and carry state, you saying that he looked like he was armed is not legal justification for you stopping him. He could possibly have a conceal and carry.”
Around 100 protesters gathered Saturday evening at the parking lot of a strip mall on the street where Augustus was shot in a scene that grew increasingly tense as the night drew on. Some protesters threw rocks and bottles at officers, injuring some, and videos from the scene show officers rushing protesters and striking them with batons. Four people were arrested.

A very large crowd is gathering at 71st/Chappel, where Chicago Police say they shot and killed a person this evening. It’s hard to put in words how tense the scene is. Witnesses say a female officer shot the man in the back while he was running away. He was a local barber. pic.twitter.com/aaV6smY07V
— Nader Issa (@NaderDIssa) July 15, 2018

The Black police officer who was eager to brutalize the people with his baton was seen attacking people the whole night. He lives in the Black community, he needs to be identified. #HarithAugustus #ChicagoPolice pic.twitter.com/fEbgl9CIjh
— Black Truth Manifesto (@ZuluPanther) July 15, 2018

Here’s the rest of the escalation, including multiple Chicago Police officers on top of one man, hitting him, and then dragging another man. This is also the start of where I get shoved to the ground. That video is coming next. pic.twitter.com/AJ7t85nEHP
— Nader Issa (@NaderDIssa) July 15, 2018

Then on Sunday, police blocked protesters from marching onto an expressway near the site of the shooting, and the rally concluded outside the barbershop where Augustus worked, a block from where he was killed.
Another protest followed on Monday, where protesters invoked McDonald’s name as one organizer encouraged them to attend Tuesday’s pre-trial hearing in the case. At the hearing, a judge announced that the trial of former Chicago police officer Jason Van Dyke, who shot McDonald in October 2014, would begin on Sept. 5. Around 25 supporters attended the hearing, according to Calloway, and a smaller crowd rallied outside the courthouse.

Van Dyke shot and killed McDonald while responding to a complaint that the teen was breaking into cars in a parking lot. A dash cam video shows Van Dyke shot McDonald 16 times, continuing to fire even after McDonald had dropped to the ground. The video contradicts Van Dyke’s claim that he shot McDonald, who was armed with a knife, after the teen lunged at him. He is charged with first-degree murder and 16 counts of aggravated assault with a firearm—one for each bullet he fired at McDonald—and could face a maximum sentence of life in prison if convicted.
Callow and other local activists held a community meeting Tuesday evening at St. Sabina, a church in another South Side neighborhood known for its members’ advocacy to curb gun violence, to discuss plans for how to manage unrest that could follow a possible acquittal in the McDonald case—a verdict some activists believe is very possible. At least 40 people attended the meeting, where Calloway, who led it, called for peaceful protests.
Johnson, the police superintendent, and Chicago Mayor Rahm Emmanuel have also called for peaceful protests. Augustus’ family led the vigil Wednesday evening outside the barbershop where he worked. Augustus’ colleagues at the shop also spoke.

Snoop’s colleague speaks of him as a beacon of strength and positivity in the community who made others feel safer #HarithAugustus pic.twitter.com/qGTz3wkH98
— BLMChicago (@BLMChi) July 18, 2018

Vigil for #HarithAugustus happening now outside the barbershop where he worked.
Harith was killed by Chicago Police on Saturday down the block from here. pic.twitter.com/OstQE1SxLC
— agitator in chief (@soit_goes) July 18, 2018 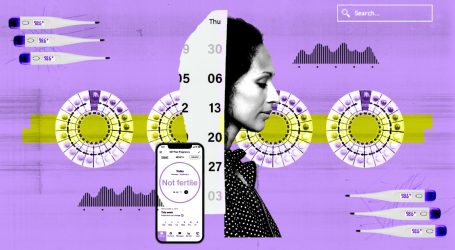 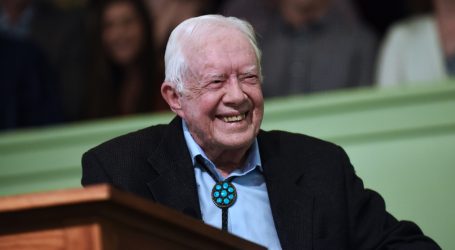 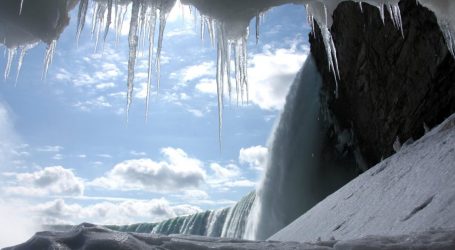