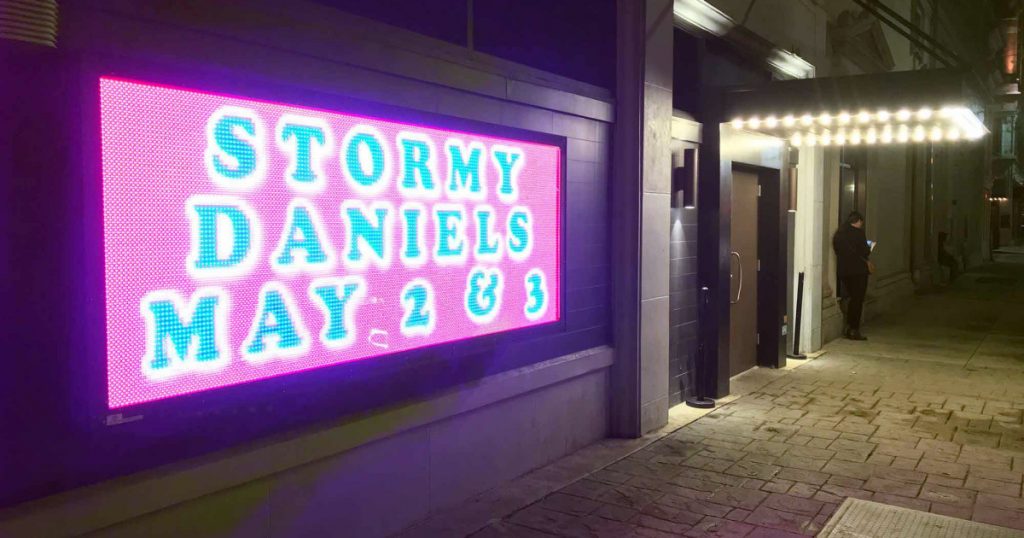 A sign outside of Blush in Pittsburgh advertises the night’s featured performer.Clint Hendler/Mother Jones

The most talked-about woman in American politics took the stage at about a quarter past 10 p.m. on Thursday for a 15-minute, four-song dance set. Strutting across a mirror-backed platform graced by a pair of shining, two-story-tall stripper poles, Stormy Daniels was welcomed with applause, cheers, and before long, a rain of bills.
Not all the money came from men angling to touch or be touched by Daniels. The crowd at Blush, a downtown Pittsburgh strip club, was full of people who had paid at least $20 and agreed to a two-drink minimum. Many were there not just to see living history, but to demonstrate their support of Daniels—and their dislike of the man she says she had an affair with more than a decade ago.
“We’re both moms, and we never get to go out. I think we’d do anything to show our anti-Trump allegiance.”“Erin and I, we’re both moms, and we never get to go out,” Emily McCann, a teacher at a nearby school, told me. “I think we’d do anything to show our anti-Trump allegiance.”
“It’s only 20 bucks to see the woman who could take down the president,” Erin, a software developer, replied. (She, like many of the club’s patrons, understandably didn’t want her full name used.)
Daniels’ first song was Lenny Kravitz’s cover of “American Woman,” which paired well with her sequin- and star-spangled bodice, bra, and open-front skirt. She proceeded through the Sick Puppies’ “Stick to Your Guns” and Poison’s “Every Rose Has Its Thorn,” as the announcer encouraged the crowd “to keep those bills coming.” By the final song (Tom Petty’s “American Girl”), she was wearing only a red, white, and blue garter. Along the way, she simulated fellatio on a young man sitting in a $40 reserved seat in the front row. This involved a concealed bottle of white liquid. He happened to be the only person in sight wearing a Make America Great Again hat.
He was easily outnumbered by a group of four women wearing “Friend of the Pod” T-shirts sold by Crooked Media, which produces Pod Save America, the popular Resistance podcast. They’d been a couple of blocks away attending a live taping of Lovett or Leave It, a spinoff podcast hosted by former Obama speechwriter Jon Lovett, when they heard about Blush’s evening headliner and decided to head over.
“We’re Stormy fans. We belong to a group called We’re Still Here. We meet once a month. We’re like a support group, but we’re also part of the resistance,” Sharron Laffey said, noting they had taken part in the January 2017 Women’s March and protests against gun violence.
“I feel like Stormy Daniels is not giving up. She’s continuing to speak up about who Trump is and what he did to her. Just last night, we found that he paid the $130,000. He was lying about it. I don’t know why anyone was surprised, but there it is,” she added. “This is part of the #TimesUp and #MeToo movement.”
Standing on zebra-print carpet near the bar with a group of friends that included an anthropologist, a grad student, and a newspaper editor, Paulette Poulet had a simple explanation for coming: “I already donated to her legal defense fund. So I’m here to support her.”
The performance was part of Daniels’ two-day visit to Pittsburgh, promoted with a poster showing her backed by an American flag and calling her “the most famous porn star in history.” When the announcer introduced her to the crowd, he boasted of her many awards from the adult film industry and her status as Penthouse Pet of the Century, before pivoting to cite her appearances on “every major news outlet.” He pointed out that her 60 Minutes interview was “the most watched in 10 years.”
To the right of the stage, a party including a half dozen co-workers from a web and app design company had reserved a table and ordered bottle service.
“I was going to bring her a thank-you card just for all she’s done for the American public,” Kris Arnold remarked. “She’s a real American hero.”
Arnold’s boss, Keith Mitchell, voted for Trump, but even he has found the recent news head-spinning. “Today was a little much, with the ‘I didn’t know about it, but then I paid it,’” he said. “The constant lying—why lie?”
As the last notes of the Tom Petty and the Heartbreakers’ jangling guitars faded out, Daniels blew a kiss and reached her hand high to give a wave. A club employee followed her onstage with a white plastic laundry basket and began scooping up the scattered bills. Patrons immediately formed a line heading up the stairs for the autograph session and a chance to meet the woman who several audience members had called “the new Marilyn Monroe.”
Al Bortz, who has owned and operated Blush for nearly 50 years, observed that the last time the club had the same kind of buzz was when Jenna Jameson, whom he described as the “Babe Ruth of porn,” performed. As a pair of new dancers headed toward the poles in lingerie, Bortz moved toward the door in his tan suit and tie, aiming to introduce himself to departing customers who had just made their first visit to his club: “Thanks for coming. I hope you come back. It’s a nice place.”
“It was a nice mixture of people. Younger people, older people. You had women, you had couples…There were a lot of people who had never come to the club before,” he said. “The kind of people you want to have in your club.”
“From some of the women, I heard they didn’t vote Trump,” Bortz added. “I did—so I told them we didn’t have to talk about that.” 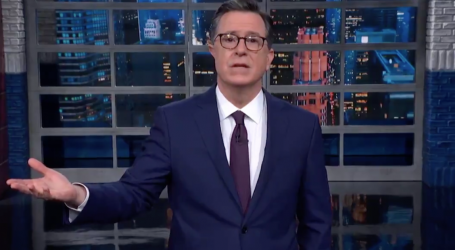 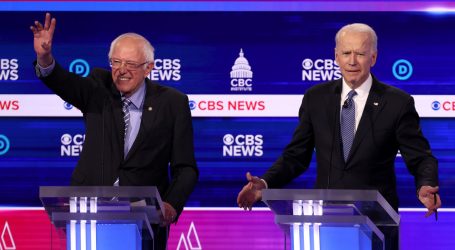 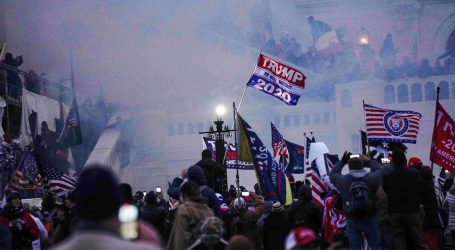