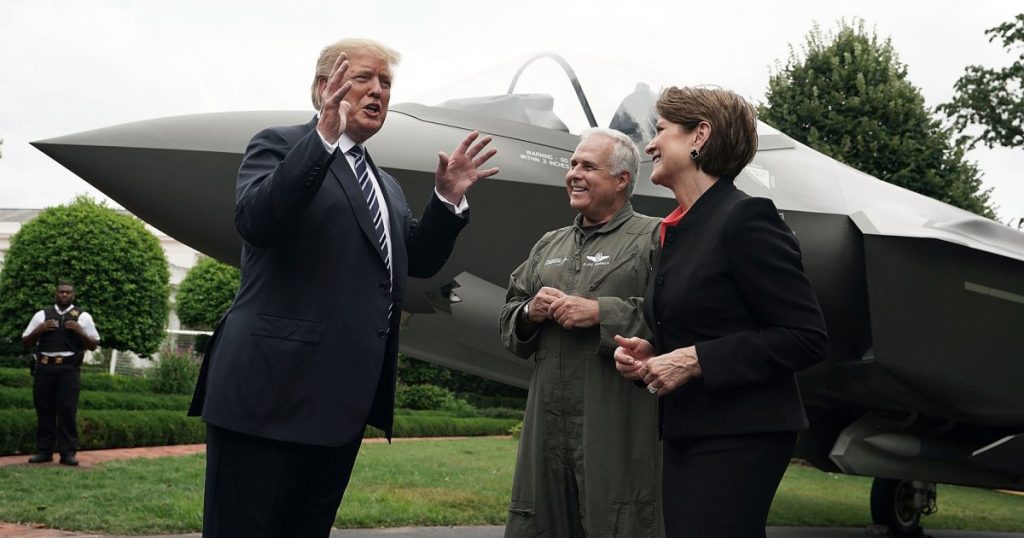 President Donald Trump talks with Lockheed Martin CEO Marillyn Hewson at the Made in America Product Showcase at the White House in July 2018.Alex Wong/AP

When President Donald Trump tried to justify selling American weapons to Saudi Arabia last year, he claimed that arms sales to the kingdom would create “hundreds of thousands of jobs” and bring “much additional wealth to the United States.” Defense analysts have knocked down his shifting claims that that these deals could create as many as a million jobs. Now a new report finds that not only were Trump’s numbers grossly inflated but that American defense companies are increasingly sending jobs overseas while helping other countries expand their capacity to build weapons systems.
“One of the biggest claims that Trump makes is that this is a huge job creator,” said William Hartung, the director of the Arms and Security Project at the Center for International Policy and a coauthor of the report, in a call with reporters. According to the newly released report, the Trump administration inked $78.8 billion in international arms deals in 2018, a slight drop from the year before. “One of the most interesting things we’ve found is that about 25 percent of the $78.8 billion in deals were for licenses to manufacture US weapons or US weapons’ components overseas—40 licenses worth over $19 billion,” Hartung said.
Agreeing to let countries manufacture American arms has become “a way to close a deal,” Hartung said. “When you’re making a foreign sale, [defense companies] may say, ‘We’ll let you build this thing there if you buy it from us’… It is a substantial practice. It’s one that’s not discussed when President Trump brags about jobs.”
The number and value of licenses granted to manufacture US weapons and weapons components overseas increased by more than 50 percent from 2017 to 2018. In 2018, there were six arms licensing deals with Japan, five with the United Kingdom, three with Israel, and three with South Korea.
Some of these agreements to make American weapons overseas involve “substantial numbers of jobs,” Hartung said.  For example, “if they’re assembling F-35s in Italy and they built a factory for that, it would not only assemble the planes bought by Italy, but the ones going to Europe.” Similarly, engines and completed F-35s will be made in Japan, likely not just for Japan but other Asian countries purchasing the next generation of American jet fighter. “That’s a significant export of jobs just in those two,” says Hartung.
Even before accounting for the potential of offshoring defense jobs, the total number of jobs provided by arms sales are less than two-tenths of one percent of the US labor force, according to Hartung. A White House statement released in May 2017 when the US signed a major arms deal with Saudi Arabia noted that it would “potentially” support “tens of thousands of new jobs in the United States”—a far cry from as many as 1 million Trump later claimed. But exporting jobs could pose long-term challenges to the arms industry. “In some cases, these deals are actually building up potential competitors,” Hartung says. “It’s not just jobs in the moment, but possibly jobs in the future.”
Beyond the jobs issue, there’s the question of how these US-supplied arms and technologies will be used. The Center for International Policy study also found that while US foreign military arms sales decreased by a few billion dollars in 2018, the value of firearms deals shot up by more than 14 percent to $759 million. Saudi Arabia was the biggest customer, signing deals worth $579 million of machine guns, sniper rifles, and grenade launchers that could be used in its war in Yemen, where it has been accused of indiscriminate killing.
The UK landed a $2 billion deal to license the production of Paveway bombs, which Hartung notes have been used in the war in Yemen, including the bombing of a school bus, killing 40 children, last year. “Another questionable offer,” the study notes, “was a $22 million deal for handguns to the Philippines, where the military and police have engaged in extrajudicial killings that have left thousands dead and injured.” 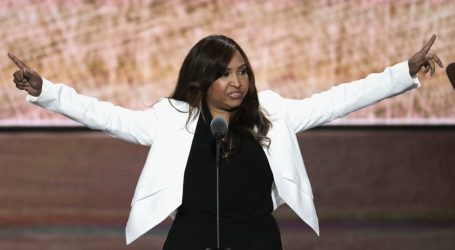