Black Politics
5 hours ago-Lit: President Biden Issues Pardons for Federal Marijuana Possession
5 hours ago-Herschel Walker Says the Allegations Against Him are Untrue and He Didn’t Send Anyone Money for an Abortion, But That He Sent Lots of People Money for Lots of Things and It’s Hard to Keep Track, and If the Story Were True It Would Be Nothing to Be Ashamed of Because He Believes in Forgiveness, But He Has Done Nothing to Be Forgiven For, and Is Living Proof That You Can Make Mistakes and Move Forward, Which Is Really What This Campaign Is All About.
5 hours ago-How a Hostile America Undermined Its Black World War II Veterans
5 hours ago-Pathos and Panic: Russians Are Mobilized for an Undeclared War
1 days ago-Biden and DeSantis Pledge Relief and Cooperation After Hurricane Ian
Local News
January 25, 2016
Author: jwelcome

Jury selection begins Monday in Gwinnett County for a man charged with murdering his wife.

Matthew Leili is accused of killing 44-year-old Nique Leili in 2011. However, the case took years to evolve.

Leili reported his wife missing four-and-a-half years ago and filed for divorce days later. He told authorities Mrs. Leili had abandoned him and their two daughters. Shortly after, family and friends found the mother’s body in a wooded area near the couple’s home in unincorporated Lawrenceville, Georgia. She was naked and covered in a pile of leaves.

Officers began their investigation, seizing computers and surveillance equipment from the Leili home. But they didn’t make any arrests at the time.

Nique’s relatives filed a wrongful death lawsuit against Matthew Leili. And after a re-examination of seized equipment, Gwinnett County Police announced in March 2015 Leili had been charged with murder and eavesdropping.

The couple’s daughters have proclaimed their father’s innocence, including in a YouTube video and at a 2015 bond hearing. Leili was denied bond. 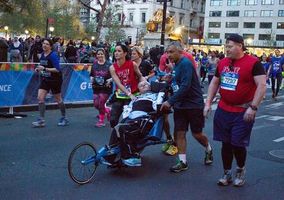