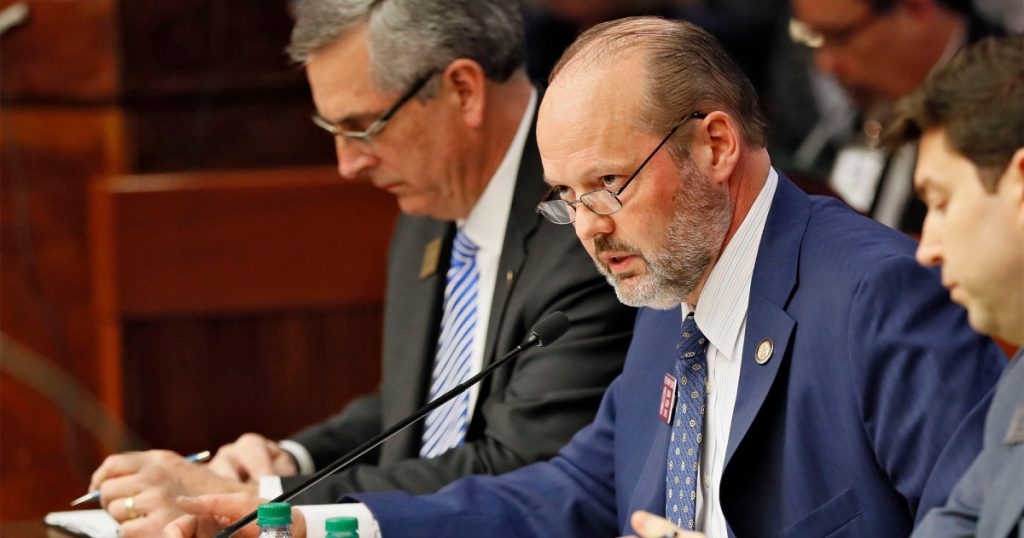 Let our journalists help you make sense of the noise: Subscribe to the Mother Jones Daily newsletter and get a recap of news that matters.After Donald Trump failed to overturn the 2020 election results in Georgia, Republicans in the state’s legislature are doing everything they can to make it more difficult for Democrats to win the next one.
On Thursday, with almost no public notice, Georgia House Republicans introduced a 48-page bill to significantly change voting procedures in the state in a way that particularly targets Black voters in the Atlanta metro area. This followed similar moves by the state Senate earlier in the week.
The House bill, sponsored by Republican state Rep. Barry Fleming, chair of a newly created Special Committee on Election Integrity, limits the weekend early-voting period to only one Saturday before the election. Fleming claimed the provision will provide “uniformity” in voting hours across the state, but in practice it will take away voting opportunities for large, heavily Democratic counties in Atlanta, like DeKalb and Fulton, which held early voting on multiple weekends in the runup to the 2020 election when many Black voters turned out.
It specifically eliminates early voting on Sundays, when Black churches traditionally hold “Souls to the Polls” get-out-the-vote drives. The January 5 runoffs were the first time that Democrats outnumbered Republicans during in-person early voting, and Black voters constituted a third of early voters. In the November general election, Black voters used early voting on weekends at a higher rate than whites in 43 of 50 of the state’s largest counties.
“This bill is Jim Crow with a suit and tie,” said Aunna Dennis, executive director of Common Cause Georgia.
When North Carolina Republicans eliminated Sunday voting in 2013 after the Supreme Court gutted the Voting Rights Act, the 4th Circuit Court of Appeals called it “as close to a smoking gun as we are likely to see in modern times” and struck it down for targeting Black voters “with almost surgical precision.”
Republican leaders in Georgia notably stood up to Trump when he sought to overturn the presidential election results in the state, with GOP Secretary of State Brad Raffensperger defending the integrity of the system by holding three recounts that found no evidence of fraud. But that hasn’t stopped Republicans in the legislature from introducing bill after bill to limit voting options after Georgia turned blue, and Black voters showed up in record numbers during the January runoff to elect two Democratic senators.
The proposed reduction in early voting times in Georgia seems likely to make already-long lines in the state worse. Voters in Atlanta waited up to 11 hours to vote during the November general election, and during the June primary, voters in predominantly white areas waited six minutes to vote while voters in areas predominantly of people of color waited 51 minutes to vote.
Other provisions of the bill would add a voter-ID requirement for mail-in ballots, give voters less time to request mail-in ballots and election officials less time to send them out, throw out ballots that are cast in the wrong precinct, and restrict the use of mail-in ballot drop boxes.
The proposals “would have devastating consequences for voting rights in Georgia,” wrote a coalition of 28 voting rights groups led by Stacey Abrams’ organization Fair Fight Action, “and the people of Georgia have been blindsided by its release.”
Democrats were angry that the House bill was released at 1:53 p.m. on Thursday before a 3 p.m. hearing. “None of the Democrats had anything to say about it,” said state Rep. Rhonda Burnough, a Democrat from south Atlanta. “The public, people of color, didn’t have any opportunity to review or give an opinion.”
“There’s nothing more important fundamentally than a person’s right and the privilege of voting,” says Calvin Smyre, dean of the House and a longtime civil rights activist. “Something like this requires a lot of vetting.”
Georgia Senate Republicans have introduced their own bills to restrict voting access, including ending no-excuse absentee voting—which 1.3 million voters used in 2020—and adding voter ID requirements for mail-in ballots. The bills were passed by subcommittees of the Senate Ethics Committee at 7 a.m. on Wednesday morning with no public livestream, which also prompted an outcry from Democratic members who argued that Republicans were passing the bills with little public scrutiny.
“Clearly we are trying to hide something from the public, the people we answer to,” state Sen. Elena Parent, a Democrat from Atlanta, told the Associated Press. “This gamesmanship is unacceptable.”
While these restrictive bills are moving forward, they must still pass both chambers. Republicans are divided on how far to go, with some prominent Republicans like Lt. Governor Jeff Duncan and Speaker of the House David Ralston warning against eliminating no-excuse absentee voting. Republican Gov. Brian Kemp is up for reelection and expected to face Abrams again in 2022, and while signing new voter suppression bills could give him an advantage by reducing Democratic turnout (as was the case in their last match-up in 2018), it could also spark a backlash among Black voters and the state’s rapidly diversifying electorate.
While Georgia has become ground zero for GOP voter suppression efforts following the 2020 election, Republicans across the country are seeking to weaponize Trump’s Big Lie to make it harder for Democratic constituencies to cast a ballot, by rolling back mail-in voting, cutting early voting, and making it more difficult to register to vote. According to the Brennan Center for Justice, 165 new voting restrictions have already been introduced in 33 states this year. This week Iowa Republicans introduced a sweeping voter suppression bill cutting early voting and restricting mail-in voting, while Florida Republicans introduced a bill that would end the long-standing practice of automatically sending mail-in ballots to voters who regularly vote by mail.
The Brennan Center calls the new war on voting “a backlash to historic voter turnout in the 2020 general election, and grounded in a rash of baseless and racist allegations of voter fraud and election irregularities.”