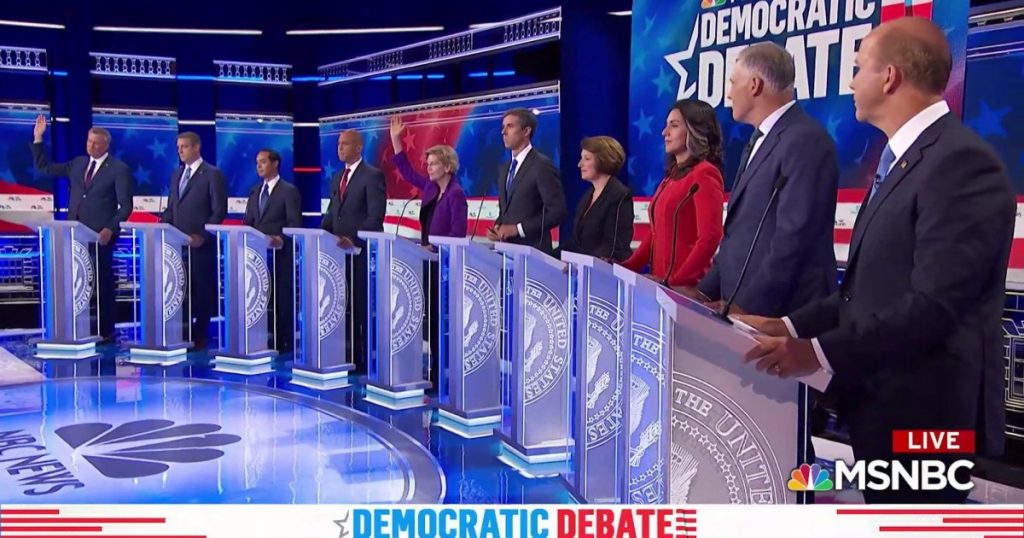 Ten Democratic presidential candidates respond to a question about health care during the first 2020 Democratic debate in Miami, Fla., on June 25, 2019.MSNBC

Twenty minutes into the first night of the first 2020 Democratic debate, NBC Nightly News anchor Lester Holt asked a straightforwards yes or no question of the field: “Who here would abolish their private health insurance in favor of a government run plan?”
Elizabeth Warren’s hand shot up immediately from the center of the stage. It was a hand many progressives had been waiting to see. The Massachusetts senator has defined her run for the White House with a bevy of detailed plans, but her stance on health care had been a bit more elusive. “There are a lot of different ways to get there,” she told the New York Times without specifically naming the single-payer plan pushed by her 2020 rival, Sen. Bernie Sanders. “‘Medicare for All’ has a lot of different paths.”
But she couldn’t have been clearer when she explained her answer from the debate stage on Wednesday night. “I’m with Bernie on Medicare for All,” she said. She added that the profit-driven private health care industry had left families rising premiums “rising premiums, rising copays, and fighting with insurance companies.”
“Medicare for All solves that problem,” she explained from the stage.
But Warren and New York City Mayor Bill de Blasio—the only other candidate to raise his hand in response to Holt’s question—were in the minority. Most of the rest of the candidates appeared to coalesce around Medicare for America instead, a universal health care plan authored by Reps. Rosa DeLauro (D-Conn.) and Jan Schakowsky (D-Ill.). It would offer a comprehensive federal insurance option to uninsured Americans, while allowing those who have employer-provided insurance to keep it if they choose. Former Texas Rep. Beto O’Rourke voiced support for it, noting that it would allow anyone who needs insurance to easily obtain it. “But if you’re a member of a union, and you negotiated for a health care plan that you like because it works for you and your family, you’re able to keep it,” O’Rourke said.

New Jersey sen. Cory Booker expressed support for a pathway like it, as well, as a first step to move toward Medicare for All. Washington Gov. Jay Inslee and Minnesota Sen. Amy Klobuchar, meanwhile, voiced their support for a “public option.”
Notably, neither Ohio Rep. Tim Ryan nor Hawaii Rep. Tulsi Gabbard—both of whom have cosponsored the House’s single-payer plan—raised their hands in response to Holt’s question. Gabbard, however, affirmed her support. “What we should be talking about is our objective: making sure every single American is able to get the healthcare that they need,” she said “I believe Medicare for All is the way to do that.”
The candidates’ substantive answers on health care offered much needed clarification on where they stood. As I wrote earlier this month, several candidates who serve in the House and Senate have signed their names to their respective chamber’s single-payer bills, but have been less clear as to what sort of health care policy they would enact as president. All candidates who spoke about health care, however, were unified in their belief that universal health care is a necessary step. 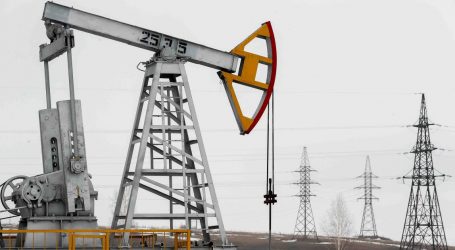 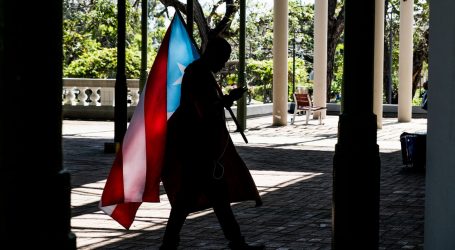