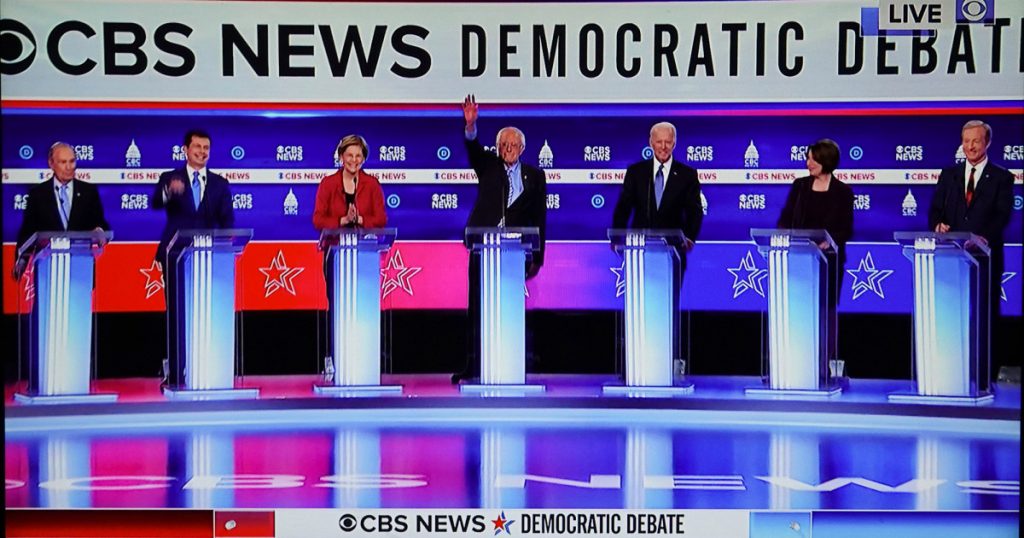 Let’s close things out with capsule reviews of each candidate.
Biden: He keeps getting more aggressive, but it’s mostly just endless repetitions of “I’m the only one on this stage that’s actually done _____ .” It’s a little hard to see this helping him a lot.
Buttigieg: Still mostly vague platitudes.
Warren: Her performance was fine, but not much different from past debates. I doubt that she did much to stop her downward slide.
Sanders: He took more hits than he did last time, but not as many as I thought he would. Warren still pulled her punches, saying only that she could get things done better than Bernie. Klobuchar said pretty much the same thing. Bloomberg hit Bernie hard early on, but I’m not sure anyone noticed.
Bloomberg: He did much better than last time. Partly that was because he wasn’t attacked as much, and partly because he seems to have learned how to give better answers. I don’t know if he helped his cause much, but he probably stopped the bleeding.
Klobuchar: Meh.
Steyer: Who cares?
I would not say that any of the candidates had a breakout moment or a great zinger, but none of them suffered a huge mistake either. I don’t expect that anyone will move up or down in the polls very much based on their performance tonight.

Normally, debate performances have only a modest effect on public support for presidential candidates. This is lucky for Mike Bloomberg, who bungled his first debate last week but suffered only a 3-point drop in the polls. But that luck won’t last forever. With Bernie Sanders surging, a second weak debate performance could put Bloomberg out of the race for good.
So how will Bloomberg do? Will everyone attack Bernie, now that he’s the frontrunner? Will Elizabeth Warren regain some of her early mojo? Will Joe Biden get through the night without a senior moment? Answers are coming soon!
9:56 pm – And that’s it. Now it’s time to vote.
9:55 pm – Gayle King wants mottos that each candidate lives by. Steyer: Always tell the truth. Klobuchar: Politics is about improving people’s life. Biden: Everyone is entitled to decent treatment. Sanders: Everything is impossible until it happens. Warren: It’s all about lifting people up. Buttigieg: If you would be a leader, you must first be a servant. Bloomberg: I’ve trained for this job for a long time, and when I get it I’m going to do something, not just talk about it.
9:48 pm – Commercial break! When we return, we’re going to ditch all this boring policy talk and get personal with the candidates. How exciting.
9:43 pm – Warren says we need to be an honest broker in the Middle East. I can’t say that this has accomplished much over the past few decades.
9:37 pm – Steyer says that 21st century warfare is cyberwarfare. There are many dead Iraqis and Yemenis and Syrians and Ukrainians and Afghans who would disagree.
9:35 pm – Klobuchar says that Sanders alienates too many voters. Vote Amy 2020!
9:34 pm – I propose a ban on the word “actually” in debates.
9:31 pm – Sanders says we need to acknowledge that the United States has overthrown regimes in the past: Chile, Guatemala, and Iran.
9:28 pm – Warren turns a question about China into an attack on Bloomberg for not releasing his taxes so we can see if he’s invested in China. That strikes me as pretty weak.
9:20 pm – Gayle King chastises Pete Buttigieg for going over time. “A minute fifteen is a long time.”
9:13 pm – Commercial break! It features a long ad from Mike Bloomberg that features women who have worked for him. That’s smart, but a little late in the program.
9:10 pm – Klobuchar and Bloomberg want to go slowly on marijuana legalization. Sanders wants to legalize it on Day One and give the marijuana business to black entrepreneurs instead of big corporations. I’m not sure how Sanders plans to change the drug schedule on his own, or how he plans to restrict marijuana sales to certain types of people and businesses. I’ll have to look into that.
8:57 pm – Bloomberg on bipartisanship: “You can work across the aisle, you just need to know how to deal with people.” Huh.
8:54 pm – “A question from our partner Twitter.” Just shoot me now.
8:52 pm – Bloomberg, Biden, and Klobuchar are competing for the “I can get it done, unlike all those other dreamers” vote.
8:49 pm – We’re sure spending a lot of time on gun violence considering how little influence a president has on it.
8:40 pm – Biden talks about “carnage on our streets” because Sanders voted against gun legislation. This whole “carnage” line was untrue when Trump used it and it’s untrue when Biden uses it. I’m all in favor of sensible gun control, but the fact is that the murder rate today is as low as it’s been anytime in the past 50 years.
8:36 pm – Commercial break! I gotta say, Elizabeth Warren is probably my favorite candidate up there, but her mini-speeches sure do sound the same every time. She could use a little variety.
8:35 pm – Bloomberg looks consistently disgusted whenever Sanders speaks. He probably needs to rein that in.
8:33 pm – Bloomberg says that if Democrats nominate Sanders, they’ll lose and lose big. That’s four more years of Trump and four more years of Trump judges.
8:28 pm – How much will Bernie’s health care plan cost? I’m here to tell you the actual answer: $3.8 trillion. That’s how much we spent on health care last year. If we switched to a different system—pretty much any system—we’d spend the same amount. The only thing that would change is which middleman pays the bills. The net cost to individuals, however, would stay pretty much the same no matter what anyone says.
8:26 pm – Buttigieg is barging into a lot of conversations tonight. For that matter, everyone else is trying to barge into every conversation too.
8:23 pm – We just finished a huge fight between Warren and Bloomberg after Warren accused Bloomberg of telling a pregnant employee to “kill it.” Bloomberg says that’s a lie. Warren tells him to prove it by releasing everyone from their nondisclosure agreements. Bloomberg says he did that but that Warren is never satisfied with anything. I’m not sure who won this exchange.
8:16 pm – Everyone agrees that Bloomberg’s implementation of stop-and-frisk was racist. Everyone but Bloomberg, that is.
8:10 pm – Sanders says that many of the issues they’re discussing tonight were things he brought up in 2016. This is quite true. Whatever else you can say about him, there’s not much question that Sanders has done a lot to set the agenda of the progressive movement over the past four years.
8:03 pm – Bloomberg goes there: he says Vladimir Putin wants Sanders to win the Democratic nomination so that Donald Trump will win the general election. 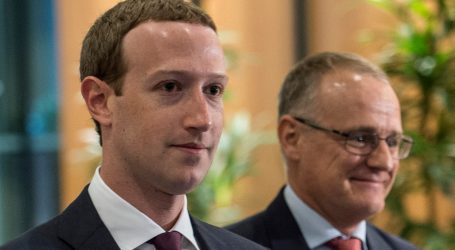 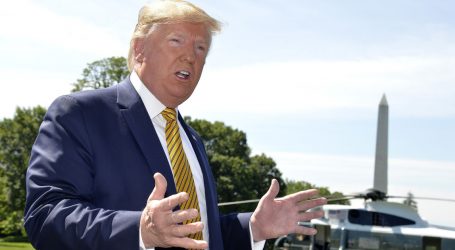 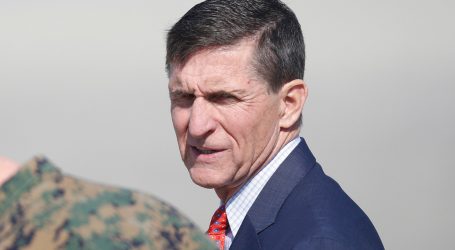