Update at 2:45 p.m.:  A federal judge on Thursday ordered Georgia to temporarily reopen voter registration until May 21.

Democrat Jon Ossoff said in a statement that he encourages “all eligible voters to ensure that they are registered and make their voices heard on June 20 and in all elections, regardless of their party or political persuasion.”

Original story: Democrat Jon Ossoff and his supporters will be closely watching a hearing Thursday over a federal lawsuit that accuses the state of illegally restricting newly-registered voters from casting ballots in the June 20 runoff against Republican Karen Handel.

A Washington-based advocacy group filed a federal lawsuit in April contending that Georgia law cuts off voter registration for federal runoff elections two months earlier than federal law requires. It seeks to allow prospective voters to register until May 22 – one month before the runoff.

The outcome could pay dividends for Ossoff, whose campaign to flip the conservative-leaning suburban Atlanta district relies on energizing first-time voters. Several of his supporters at a Chamblee rally said they planned to pack the courtroom.

“It’s about the bigger principles at stake. There is no reasonable argument for keeping folks who are eligible to vote from voting – regardless of their party,” said Ossoff. “It should never be reduced or dismissed as a partisan issue. We’re talking about constitutional rights.”

The office of Georgia Secretary of State Brian Kemp, who oversees elections, said the lawsuit brought by the Lawyers’ Committee for Civil Rights Under Law was a “completely political effort” by Democratic-leaning groups. David Dove, his chief of staff, said the law has been in place since Democrat Cathy Cox was secretary of state.

The fight centers on the National Voter Registration Act, which requires states to allow anyone to vote in a federal election if they register at least 30 days before that election. Georgia law sees the June runoff as a continuation of the April 18 special election, meaning that only residents registered by March 20 are eligible to vote.

Ossoff’s campaign said it registers an average of 100 voters a day and that, win or lose, it will is still keep signing up residents to vote.

Ossoff campaigned on Wednesday with Jason Kander, a former Missouri secretary of state who leads a voting rights advocacy group. He said he would have opened voter registration in a heartbeat were he in Kemp’s shoes. 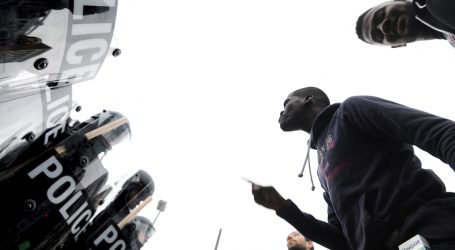