The dual developments on Tuesday created new ripples of uncertainty six days before voting in the presidential race begins. Both parties were bracing for close contests in Iowa that will determine which of their two leading candidates will carry the momentum from a victory into the New Hampshire primary the following week and beyond.

The Iowa voting will be the first test of whether political newcomer Trump’s unorthodox campaign can get the thousands of enthusiastic supporters who show up at rallies to turn out when it matters. Cruz is believed to have assembled a strong get-out-the-vote operation. Sanders is counting on enthusiastic younger voters to boost turnout to offset the organizational strength of his chief rival, former Secretary of State Hillary Clinton.

Trump raised the prospect of skipping the debate as he blasted Fox News Channel for “playing games” and including anchor Megyn Kelly as a debate moderator. Trump’s campaign later said he definitely will not participate.

The race among Democrats was no more settled, with Sanders and Hillary Clinton locked in a close contest in Iowa and details about their debate plans unclear. But the fireworks Tuesday were on the Republican side.

Trump said he would hold his own event in Iowa during the debate to raise money for wounded veterans. The billionaire businessman dismissed Kelly as a “third-rate reporter” who is bad at her job and had been “toying” with him — reprising a squabble that erupted after a debate Kelly co-hosted last year.

Kelly shot back on her nightly show, arguing that Trump is used to getting his way but can’t control the media. She said her network and CEO Roger Ailes had made it clear to Trump for months that they wouldn’t change their moderator line-up.

“I’ll be there,” Kelly said. “The debate will go on with or without Mr. Trump.”

Trump’s pullout came after Fox News Channel tweaked the Republican front-runner for asking his Twitter followers whether he should debate. The network, in a sarcastically worded statement, said it had learned from a “secret back channel” that the leaders of Iran and Russia planned to treat Trump unfairly if elected.

“A nefarious source tells us that Trump has his own secret plan to replace the Cabinet with his Twitter followers to see if he should even go to those meetings,” read the statement from a Fox News Channel representative.

Trump’s declaration was an unexpected, if not unpredictable, twist in the final days of the Iowa campaign. The real estate mogul had threatened repeatedly to boycott debates before, only to ultimately acquiesce.

By picking a fight publicly, Trump assured that even if he goes through with his plan not to show up Thursday, his absence will be the center of attention.

Cruz, appearing at an evening rally, offered to face Trump “mano a mano” anytime. He said Trump was scared of Kelly, telling supporters that skipping the debate was like refusing a job interview.

“If someone did that, didn’t show up at the interview, you know what you’d say? You’re fired,” Cruz said, riffing on Trump’s famous rejoinder from his reality TV show “The Apprentice.”

There was drama on the Democratic side as well.

As Sanders left Iowa and Minnesota for his meeting with Obama on Wednesday, it was being watched for signs of the president’s leanings. He’s sought to avoid showing favoritism, and White House spokesman Josh Earnest said the meeting would be informal, with “no formal agenda.”

Just a day earlier, Clinton had been soaking in presidential praise. In a Politico interview, Obama called her “wicked smart” and immensely qualified to run the country, in his most extensive comments to date on the race. Obama has met with Clinton, his former secretary of state and 2008 primary opponent, periodically. Unlike the Sanders meeting, the White House typically hasn’t disclosed those sessions in advance. 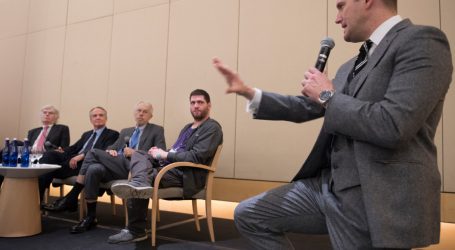 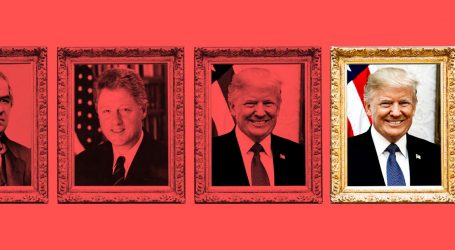