FOX 5 News has learned a Georgia mother gave birth to conjoined twins Monday morning. They are listed in critical condition.

Twin boys Chandler and Chance were delivered by C-section at Georgia Regents Medical Center in Augusta.

Last week, FOX 5 caught up with their mother, 26-year-old Brittany Crafton. She said during her second ultrasound, the sonogram revealed the babies were sharing more than just a brotherly bond: they share a heart.

“I didn’t see, ‘oh… conjoined [twins].’ I didn’t think about that. I saw two little babies,” the first-time mother said, upon seeing her first sonogram.

She said that sight of her twin boys in an embrace deterred any thoughts about terminating her pregnancy, despite the risks.

“How could you do something to two little babies, just looking like they’re hugging each other?” she said.

Doctors said the boys share a heart and liver, suffer from clubfoot and have a dislocated hip, but they have a good prognosis for survival. The hospital said the boys can only be surgically separated if one of the babies is given a heart by a donor.

“What makes this case special is that the heart the twins share is quite normal and has been functioning very well for them. So, we believe it will continue to function well after the delivery,” said Dr. Paul Browne of Maternal-Fetal Medicine at Georgia Regents University and Health System, through the hospital’s release.

Crafton plans on focusing on the extensive and expensive care the babies now need. The boys will require specialized baby products, from cribs, car seats and clothes.

Early Monday morning, Crafton said on her Facebook page the journey hasn’t been easy, but it was worth it. She credits God to keeping her strong throughout the pregnancy.

“If I didn’t depend on Him as much as I do I would have been stressed out and gave up on my babies a long time ago,” she said. 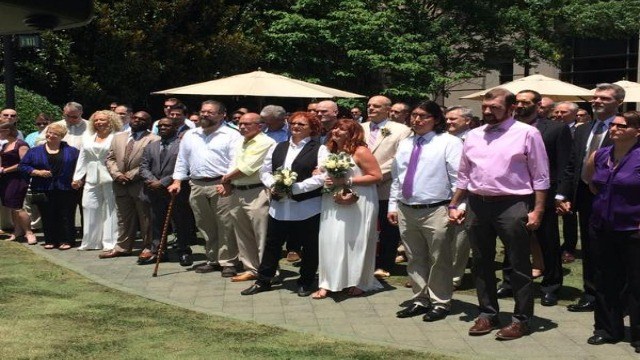