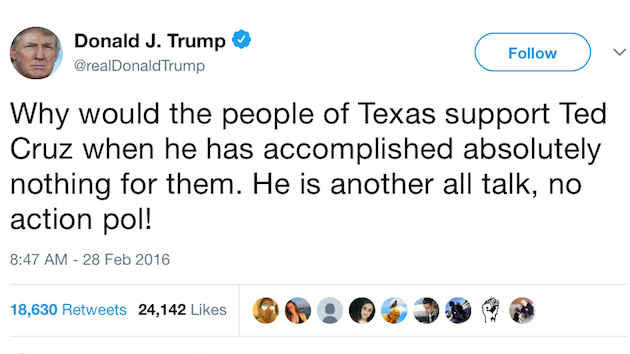 Facing an unexpectedly strong challenge from Democrat Beto O’Rourke, Ted Cruz solicited the help this week of Donald Trump. The president will be coming to Texas next month to bolster his one-time rival’s reelection bid.

I will be doing a major rally for Senator Ted Cruz in October. I’m picking the biggest stadium in Texas we can find. As you know, Ted has my complete and total Endorsement. His opponent is a disaster for Texas – weak on Second Amendment, Crime, Borders, Military, and Vets!
— Donald J. Trump (@realDonaldTrump) August 31, 2018

“Ha ha ha,” the world responded to the news that Cruz had sought help from a man he once called “a sniveling coward,” a man who repeatedly slandered his wife, a man who alleged his father conspiring to kill JFK. “Ha ha ha.”
Now it seems that chorus of laughter has grown so loud it will soon extend beyond its humble origns on the internet.
A GoFundMe page by USA Latinx seeking to put one of Donald Trump’s anti-Cruz tweets from 2016 on a billboard raised nearly $10,000 in one day, nearly doubling its fundraising goal.
“President Donald Trump will be campaigning to help Sen. Ted Cruz win his re-election. A rally is being planned, according to Trump “at the biggest stadium in Texas,” the page organizers write. “We are planning to display the presidents own words about Cruz from 2016 on a mobile billboard, to remind Texans of the truth.”
The tweet in question dates back to February 2016 when Trump and Cruz were campaigning for the GOP presidential nomination ahead of the Texas primary.

Why would the people of Texas support Ted Cruz when he has accomplished absolutely nothing for them. He is another all talk, no action pol!
— Donald J. Trump (@realDonaldTrump) February 28, 2016

It was one of many tweets activists could have chosen:

Why would Texans vote for “liar” Ted Cruz when he was born in Canada, lived there for 4 years-and remained a Canadian citizen until recently
— Donald J. Trump (@realDonaldTrump) February 24, 2016

One of the campaigns organizers is March for Our Lives co-founder David Hogg, the Stoneman Douglas High School student who along with his classmates was thrust into the national spotlight after February’s tragic shooting in Parkland, Florida.
Last month, Mother Jones had a chance to talk with Hogg and some of his fellow classmates about their surprising and inspiring journey to remake American politics. You can listen to the podcast here. 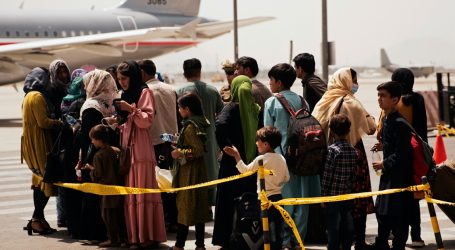 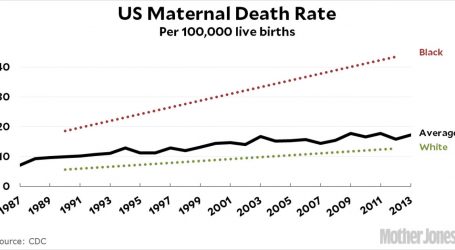 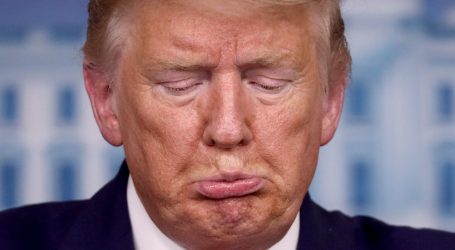