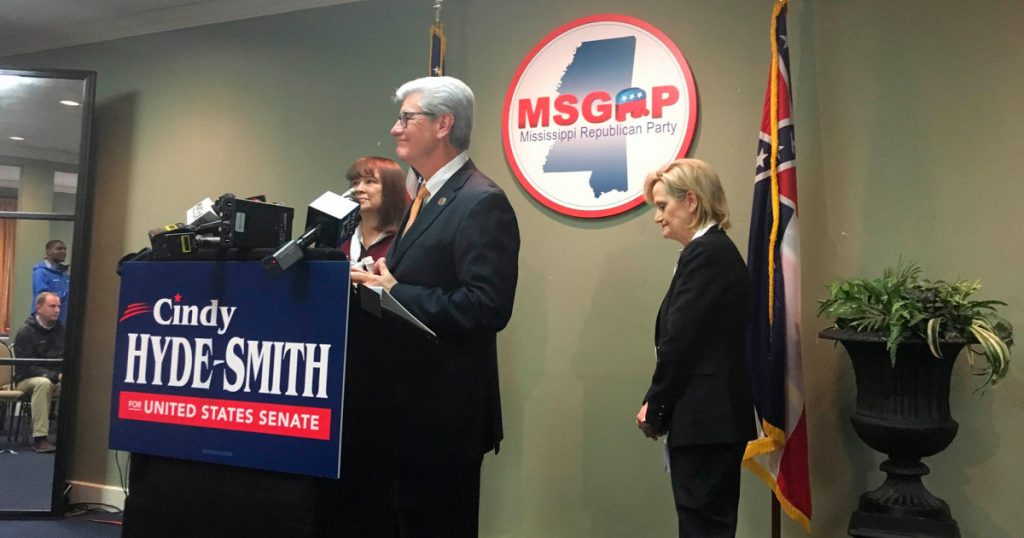 Republican Sen. Cindy Hyde-Smith of Mississippi—who is facing a runoff to keep the seat she was appointed to earlier this year—is refusing to apologize for saying that if a local cattle rancher “invited me to a public hanging, I’d be on the front row.”
The comment, which was caught on camera by journalist and blogger Lamar White, Jr., during a campaign stop in Tupelo, has sparked an intense backlash. Mississippi has a gruesome history of lynching—from 1882 to 1968, 581 people were lynched there, more than in any other state. Hyde-Smith’s Democratic opponent, Mike Espy, is black, as are 40 percent of the state’s residents.
On Sunday night, Hyde-Smith released the following statement: “In a comment on Nov. 2, I referred to accepting an invitation to a speaking engagement. In referencing the one who invited me, I used an exaggerated expression of regard, and any attempt to turn this into a negative connotation is ridiculous.”
Not exactly an apology.
On Monday, Hyde-Smith was repeatedly asked about the controversy at a press conference she held with Republican Gov. Phil Bryant to announce an endorsement Hyde-Smith had received from the anti-abortion National Right to Life Committee. She still refused to apologize. “We put out a statement yesterday, and we stand by that statement,” she said.
Asked to expand on what she meant by a “public hanging,” Hyde-Smith said, “We put out the statement yesterday, and it’s available, and we stand by that statement.”
“Senator, are you familiar with Mississippi’s history of lynchings?” another reporter asked.
“I put out a statement yesterday,” Hyde-Smith responded. “And that’s all I’m gonna say about it.”
Asked how her comments could have anything other than a “negative connotation,” Hyde-Smith said, “I put out a statement yesterday, and we stand by the statement, and that’s all I’m going to say about it.”
“Is that phrasing in your every-day lingo?” a reporter asked.
“I put out a statement yesterday,” she said. “We stand by the statement.”
Then, the question was put to Bryant, who had originally appointed Hyde-Smith to the seat.
“She is certainly addressing the fact that she has put out a statement,” he noted.
“I can tell you all of us in public life have said things on occasion that we could have phrased better,” Bryant added. “But I know this woman, and I know her heart. I knew it when I appointed her. I know it now. She meant no offense by that statement. There was nothing in her heart of ill will.”
Hyde-Smith silently nodded beside him.
Bryant wasn’t done, though.
“Absolutely we have been sensitive to race relations in this state,” he said, before complaining that prominent black leaders had refused to join President Donald Trump at the grand opening of a pair of museums in Jackson, Mississippi, dedicated to the state’s history in the Civil Rights Movement. “I brought the president of the United States here to open the civil rights museum, and African-American leadership, they would fail to even come to the event, because the president of the United States was there.”
With that, Bryant sought to tie the controversy to the issue they’d come to the press conference to discuss. Bryant, who has said his goal is to end abortion in Mississippi, declared that abortion is a “genocide of over 20 million African-American children.”
“See, in my heart, I am confused about where the outrage is at about 20 million African-American children that have been aborted,” he said. “No one wants to say anything about that.”
Watch the remarks below:

In today’s press conference receiving an endorsement from the National Right to Life President, @SenHydeSmith was only asked questions regarding her statement on “public hangings” this is what she and Gov. @PhilBryantMS had to say: #mssen #mselex pic.twitter.com/HuFZlNlq34
— Yall Politics (@MSyallpolitics) November 12, 2018 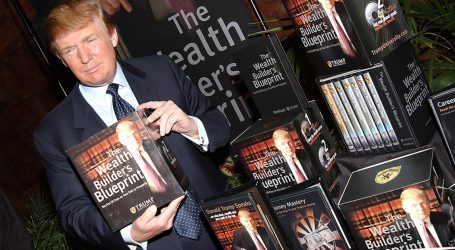 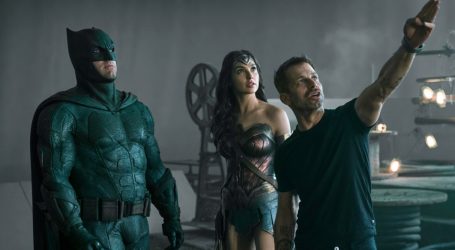 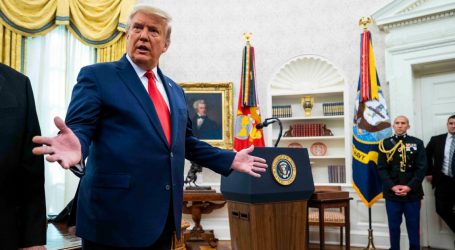