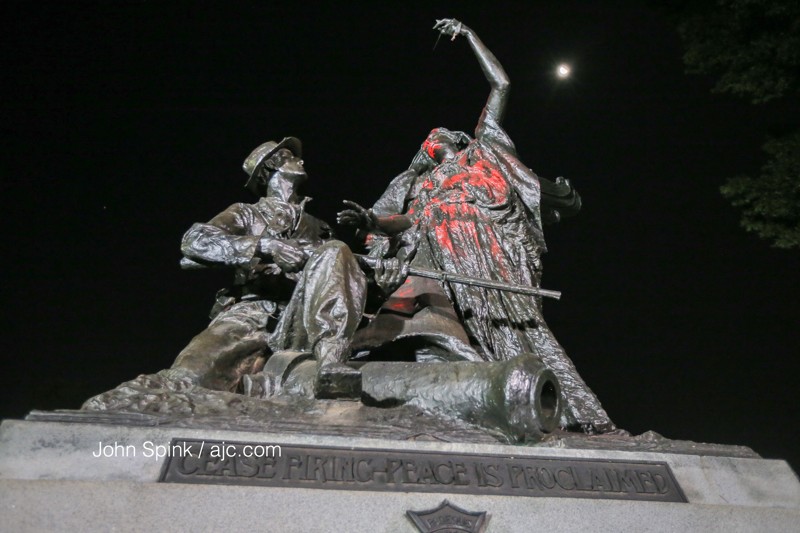 There was virtually no police presence as demonstrators walked from Woodruff Park up Peachtree Street, snarling traffic as they went. When they arrived, some climbed the statue – which shows a Confederate soldier laying down his weapon at the end of Reconstruction – and defaced it. One protester was hurt by metal falling from the edifice.

Tensions rose as the lone policeman on the scene was surrounded by black-clad antifa protesters shouting “pig.” Black Lives Matter protesters put themselves between the police officer and the antifacism crowd.

The memorial and march were organized by All Out Atlanta but drew many other participants.

Separately, in Decatur, several hundred residents with candles were joining together on the square in a much calmer vigil.

The rallies come a day after violence erupted in Charlottesville as white supremacists clashed with counterprotesters. Events turned deadly when James Alex Fields, 20, allegedly drove a Dodge Challenger into a crowd of people. Heather Heyer,  32, was killed and 19 were injured. Two Virginia troopers monitoring the protests from a helicopter were also killed.

In Atlanta, there was a tone of sharp defiance.

MORE: At Atlanta churches, anger and sadness over Charlottesville violence

That sentiment was echoed by many of the speakers. One person who spoke briefly of reconciliation was met with boos and catcalls.

A news release sent by All Out Atlanta states, “Liberal society has blood on its hands” and accuses the American Civil Liberties Union of being “spineless” in its defense of “fascists’ right to assemble” in Charlottesville.

The group organized in 2016 to counter a white supremacist rally at Stone Mountain, The Atlanta Journal-Constitution previously reported.

All Out Atlanta is made up of progressive and other left-leaning groups, including student groups, anti-fascist organizations and labor groups, as well as elements of the Black Lives Matter and Occupy movements.

A memorial to the Charlottesville victims on the square in Decatur PHOTO: JOSHUA SHARPE/AJC

In Decatur, the mood was more somber.

On the Decatur Square, white candle wax dripped from people’s hands as they bowed their heads in a moment of silence for Charlottesville and the world.

“It’s a disgrace,” attendee Dan Vogel said of the events in Charlottesville. “I think people need to stand up and say that. It shouldn’t be happening in 2017.”

Vogel was standing with Helena Herring, who held a sign calling for an end to white supremacy.

As a white woman, she said she benefits from it.

“And we have to stand up and fight it,” she said. 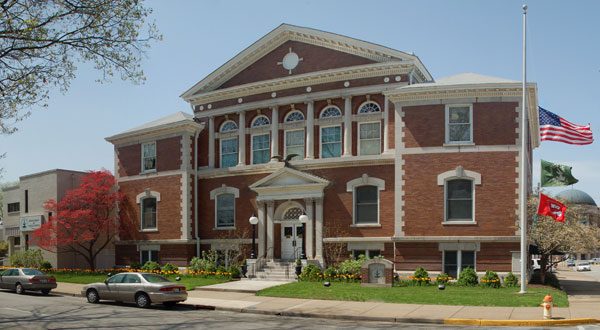